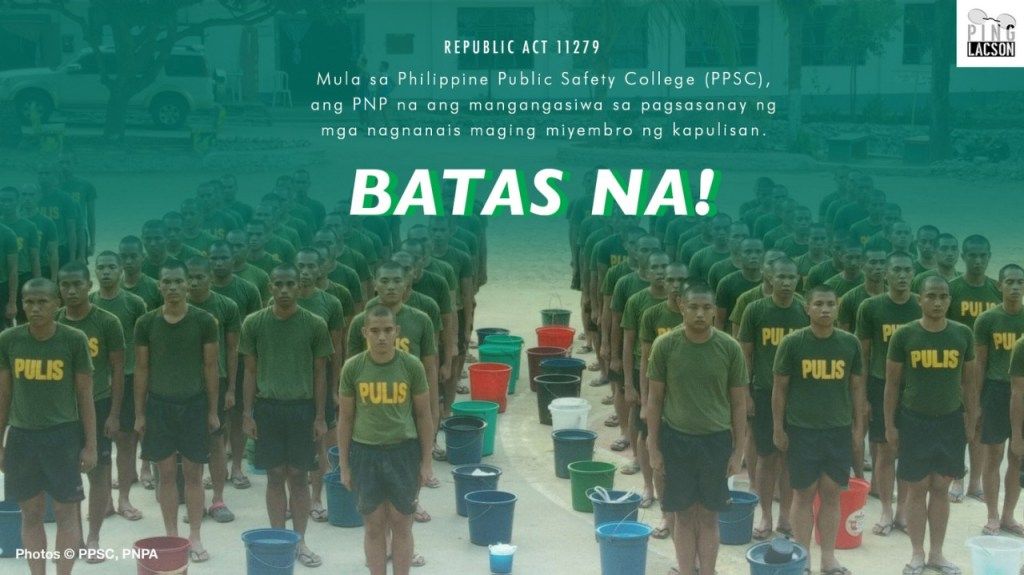 The Philippine National Police now has an added tool to build a physically and morally competent force while beefing up its internal cleansing efforts, after a bill authored by Sen. Panfilo M. Lacson was signed into law.

Republic Act 11279 – based on Lacson’s Senate Bill 1898 – gives the PNP full responsibility and accountability for the training of its new recruits.

“With the transfer to the PNP of the training of police recruits, we can strengthen the foundation of a competent police force not just physically but also morally,” said Lacson, who headed the PNP from 1999 to 2001.

He pointed out the new law, signed by President Rodrigo Duterte last April 12 but made public on Thursday, will help the PNP leadership in its internal cleansing efforts.

Lacson noted that in past months, several police officers, many of them non-commissioned ones, were involved in heinous crimes.

Hearings conducted by the Senate Committee on Public Order and Dangerous Drugs chaired by Lacson found that police officers involved in crimes such as bribery, extortion, kidnapping, illegal drugs, and even planting of evidence, involved relatively new members of the PNP.

The PNPA, which will be the primary source for commissionship of Police Lieutenants, will be under the supervision and control of the Chief PNP. The NPTI will be responsible for the mandatory and leadership training of police noncommissioned officers.

With this, the PNP will now be accountable for the entire gamut of responsibility from recruitment, education, field training and deployment of police officers.

Meanwhile, the PNPA will still accommodate cadets for the BJMP and BFP for a period of five years from the enactment of the proposed measure. This interim period will let them develop and further professionalize their own personnel.

“By delegating the training of recruits to individuals who are bereft of intellectual, physical and most importantly, moral competence, we do not only weaken the enforcement of the law; we also invite scorn and contempt for our national police force,” Lacson stressed.

Citing his personal experience as Chief PNP, Lacson said a police officer should have a deep understanding of the law, physical strength and fitness, knowledge of and facility with firearms, and the justified use of force — be it lethal or non-lethal.

But more importantly, he said a police officer “should stand firm against various tests of endurance; not just of physical, but oftentimes, of moral strength.”

“I feel the pain of having the name of the institution I once served with pride, dignity, and honor being dragged through the mire by police scalawags. Amid these anomalies that spark public outrage, we see clearly the lapses in the recruitment and education of our police officers – phases that make up the formative stage of becoming a law enforcer,” he said.

“By instituting reforms in the current system, we are strengthening the foundation of a highly efficient, effective and competent police force,” he added.