In the Spirit of Transparency: Lacson Details Institutional Amendments to 2019 Budget 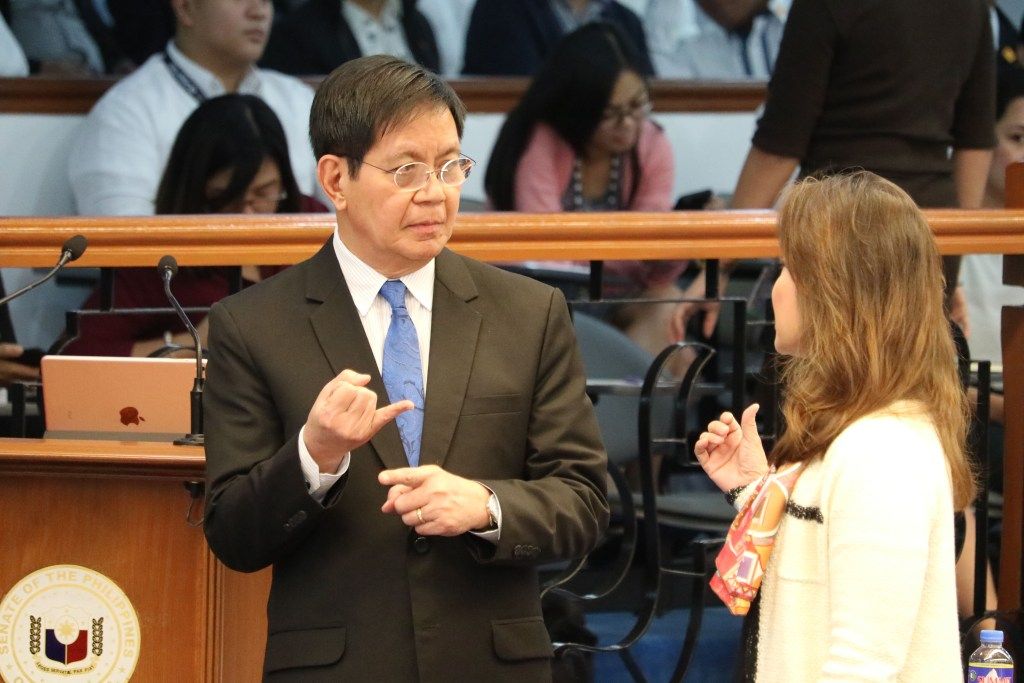 Citing the need for transparency, Sen. Panfilo M. Lacson has made public the details of the institutional amendments he proposed in the P3.7-trillion national budget for 2019.

Lacson expressed hope other proponents of amendments to the budget will do the same, to remove speculations that the bicameral conference committee is a venue for “horse trading” and compromises among legislators.

“In the spirit of transparency, I instructed my staff to make public all my amendments in the 2019 national budget. I hope all proponents will do the same to remove all suspicions that the bicameral conference is a venue for sneaky horse trading among legislators,” he said in a post on his Twitter account.

Lacson proposed institutional amendments to the budget, seeking to benefit sectors including education, the environment and national security.

He said there is no room for “pork” in these institutional amendments, for three reasons: need, planning, and vetting.

“Our taxpayers can thus sleep well knowing there is no room for ‘pork’ with these institutional amendments,” Lacson said.

In the P3.7-trillion budget for 2019, Lacson proposed institutional amendments that would benefit school children, through programs of the Department of Education. These include:

* Quick Response Fund: a P2-billion increase to P4 billion, with the added P2 billion from P8.889 billion to be deducted from appropriations for the Department of Public Works and Highways’ road right-of-way funds.

* Teacher Quality and Development Program, from P8.169 million to P1.7081 billion, with the added P1.7 billion from the P6.1 billion to be deducted from the farm-to-market road program under the Department of Agriculture

* Textbooks and other instructional materials, increase from P1.794 billion to P1.9014 billion

* Computerization program, an increase from P4.263 billion to P7.188 billion, with P2.925 billion from allocations for farm-to-market roads

Lacson also proposed institutional amendments for the Department of Environment and Natural Resources, including an increase in appropriations for the Environmental Management Bureau from P2.523 billion to P2.525 billion, with the P2.352-million increase to fund monitoring and inventory of greenhouse gases of pollution labs in Visayas and Mindanao.

For the judiciary, Lacson proposed an increase in appropriations for the Supreme Court and lower courts by P920.669 million, including:

* P111.985 million added to the operations of the Philippine Judicial Academy

* P300 million for the construction and repair of Halls of Justice

Earlier, Lacson disclosed he proposed P4.78 billion to mobilize a new infantry unit to address the threat of terrorist groups, including the Abu Sayyaf.

Lacson also sought an increase of P666.219 million for the Veterans Memorial Medical Center’s 2019 budget, so it can acquire medicines for its patients.

He said the VMMC sought his help as he was defending the budget of the Department of National Defense, which supervises the VMMC.

“The VMMC said the price index for medicines went up, and this will affect its service to its patients. During the budget hearing of the Department of Health, I asked DOH Sec. Francisco Duque III if there was indeed such a price increase for medicine, and he confirmed it. That prompted me to seek an institutional amendment for the VMMC’s budget for medicines,” he said.

Lacson also sought to increase the Pension and Gratuity Fund by P876.42 million to fund the additional P15,000 increase in old-age pension of 4,869 senior veterans.

A list of Lacson’s proposed amendments to the 2019 proposed budget, which were adopted under the Senate version and are now being deliberated in the ongoing bicameral conference, may be found here.

In contrast, Lacson said individual amendments such as flood control projects and various structures were based on lawmakers’ “intervention” and, in most cases, had no consultations with the implementing agencies concerned.

Such programs can be considered pork barrel, based on the 2013 ruling of the Supreme Court that covers whimsical and arbitrary projects, he added.

Worse, Lacson said the lack of planning may be deadly, as in the case of landslide-prone roads in the BLISTT (Baguio, La Trinidad, Itogon, Sablan, Tuba, and Tublay) area.