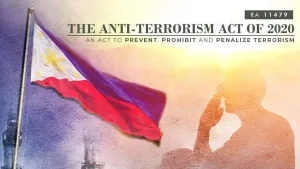 The release of the implementing rules and regulations (IRR) for the Anti-Terrorism Act of 2020 should enlighten not just our security forces but also the law’s critics and doubters, Sen. Panfilo M. Lacson said.

Lacson, who sponsored the measure in the Senate, noted the 48-page IRR places great emphasis on adherence to the Bill of Rights in the 1987 Constitution.

“As the principal sponsor of the Anti-Terrorism Act of 2020 in the Senate, I hope that the release of the law’s IRR will now enlighten our law enforcement officers as well as Armed Forces of the Philippines personnel, so they will be properly guided in performing their all-important mission of protecting our citizens from the indiscriminate and merciless acts of terrorism that can only be perpetrated by people with the ugliest and most senseless ideologies,” Lacson said.

Justice Secretary Menardo Guevarra, a member of the ATC, said they will send copies of the IRR to Congress and law enforcement agencies, and publish the IRR this week.

Lacson said he hopes the IRR would also enlighten the “doubting Thomases” on the legislative intent of the measure.

“Going through the 48-page IRR, I join all peace-loving Filipinos in commending those responsible in the crafting of the IRR for unequivocally putting emphasis on the law’s adherence to the Bill of Rights enshrined in our Constitution. I hope the doubting Thomases will likewise be enlightened as to the legislative intent of this landmark legislation,” he said.

Earlier, Lacson vowed to be eagle-eyed in making sure the law – meant to give authorities the needed legal backbone to fight the threat of terrorism – is implemented properly, meaning it is to go after terrorists and not anyone else.

“As the one who painstakingly sponsored the measure in the Senate, I will not allow anyone to pervert the legislative intent of the law, thus my commitment to go the extra mile in guarding against possible abuse in its implementation,” he said.