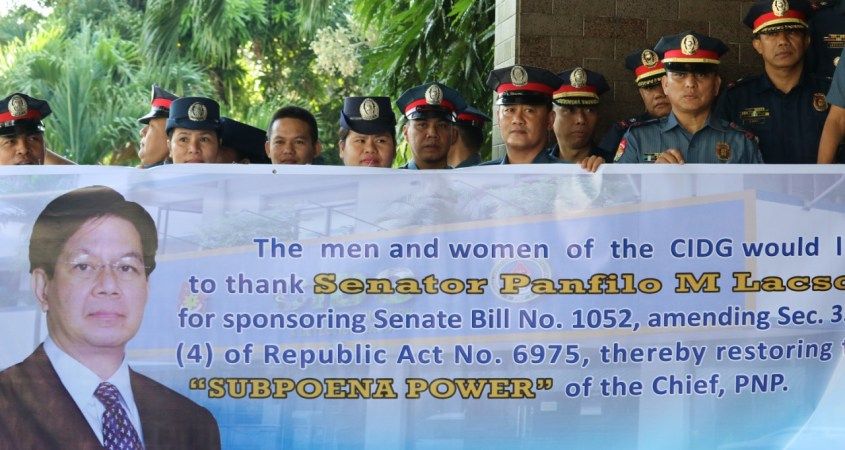 The Philippine National Police’s investigative capability may get a major boost from a bill filed by its former chief, now Sen. Panfilo M. Lacson: the restoration of its power to subpoena people and documents for investigation.

“Under the present law, the CIU (now CIDG) is mandated to undertake the monitoring, investigation and prosecution of all crimes involving economic sabotage, and other crimes of such magnitude and extent as to indicate their commission by highly-placed or professional criminal syndicates and organizations. Hence, it is somewhat contradicting that the primary investigative unit does not possess the power to issue administrative subpoenas for the conduct of their mandated duties,” Lacson said of the bill, which has been referred to the Senate committee on public order and illegal drugs.

Lacson said that when Republic Act No. 6975 was enacted, it repealed R.A. 5750, which had granted the CIS chief and deputy chief the power to administer oaths upon cases under investigation and to issue subpoena or subpoenas duces tecum for any person, documents and other matters for investigation.

He added his bill “seeks to correct this oversight” by restoring such powers previously granted to the CIU director and his/her deputies.

Besides, he said Philippine laws provide the power to issue administrative subpoena or subpoena duces tecum to other government agencies such as the Ombudsman, Department of Justice, National Bureau of Investigation, Philippine Drug Enforcement Agency, National Police Commission, Bureau of Internal Revenue and the Cybercrime Operation Center.

“It is submitted that these powers are indispensable for the CIU to carry out its mandated investigatory and prosecutory functions,” said Lacson, who headed the PNP from 1999 to 2001.