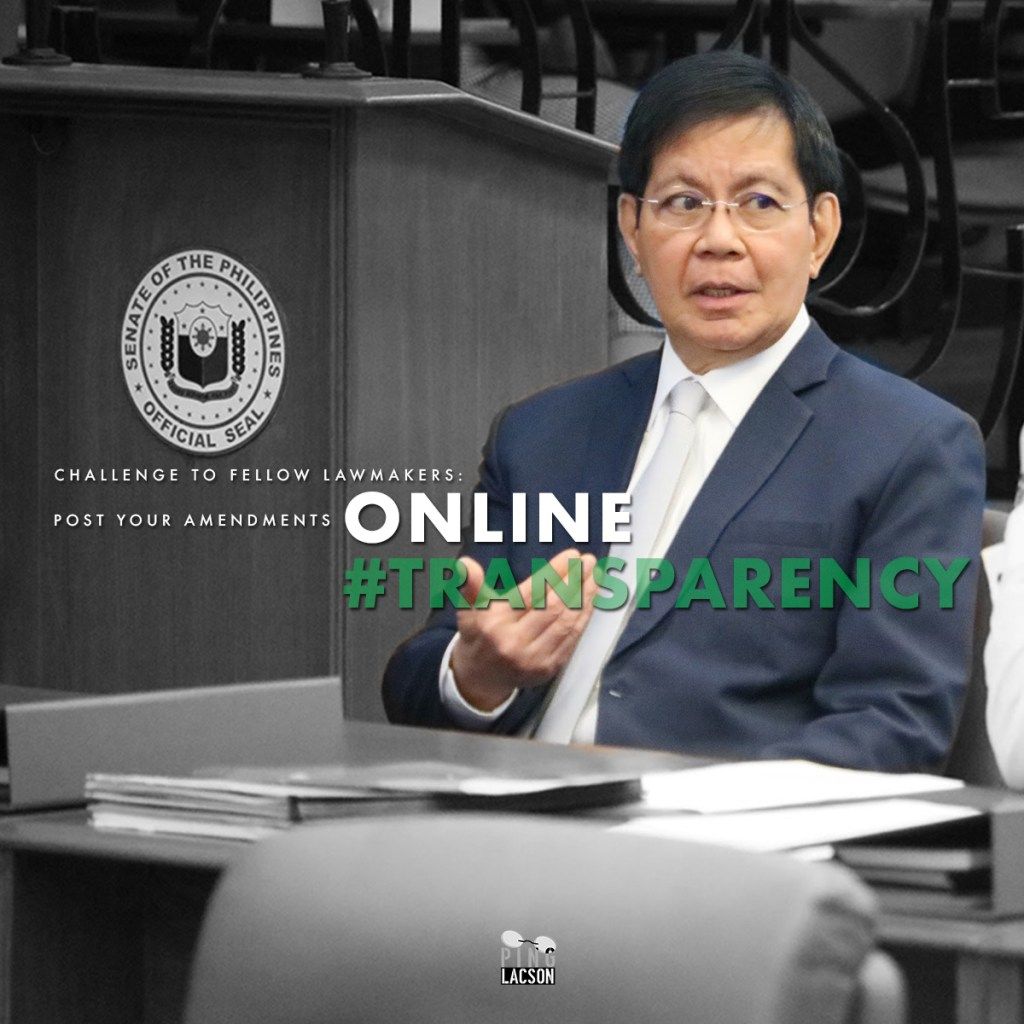 Instead of whispering proposed “amendments” to the 2020 national budget or scrawl them on napkins, why not post them online?

Sen. Panfilo M. Lacson issued this challenge to fellow lawmakers Tuesday, adding no less than such a show of transparency would dispel suspicions that the amendments are stained with pork.

“We should make everything public. That includes all amendments we submit, whether institutional or individual. We have our own websites, we should use them for this purpose, as I did for the 2019 budget,” Lacson, an avowed enemy of the pork barrel system, said in an interview on DZBB radio.

For the 2019 budget, Lacson posted online his proposed amendments, all of which are institutional – meaning these pertain to programs and projects that have undergone planning and vetting, and are based on requests from the implementing agencies concerned.

Such institutional amendments are proposed by lawmakers who find merit in them after vetting with the relevant agencies.

In contrast, individual amendments pertain to projects based mainly on lawmakers’ intervention and are considered legislators’ pet projects. In most cases, these do not involve consultations with the implementing agencies concerned, nor are they part of the Local Development Plans of the Local Government Units.

Such programs can be considered pork barrel, based on the 2013 ruling of the Supreme Court that deems as unconstitutional projects that are whimsical and arbitrary. The 2013 Supreme Court ruling declaring pork barrel as unconstitutional covers “all informal practices of similar import and effect, which the Court similarly deems to be acts of grave abuse of discretion amounting to lack or excess of jurisdiction.”

“Most if not all lawmakers have their own websites. Why not post their amendments there, for the public to scrutinize?” Lacson said.

He lamented that in past years, some lawmakers submit their amendments to their respective finance or appropriations chairpersons without having them go through floor deliberations.

Lacson, in pushing for transparency in the crafting of the national budget, said the people have the right to know where their taxes are going, especially amid a growing national debt that now stands at more than P7.9 trillion.

“The national budget involves the people’s money. It should benefit the people and not a few senators or congressmen or even government officials who implement projects. And the budget is funded by our taxes, as well as borrowings if our tax collections fall short,” he said.