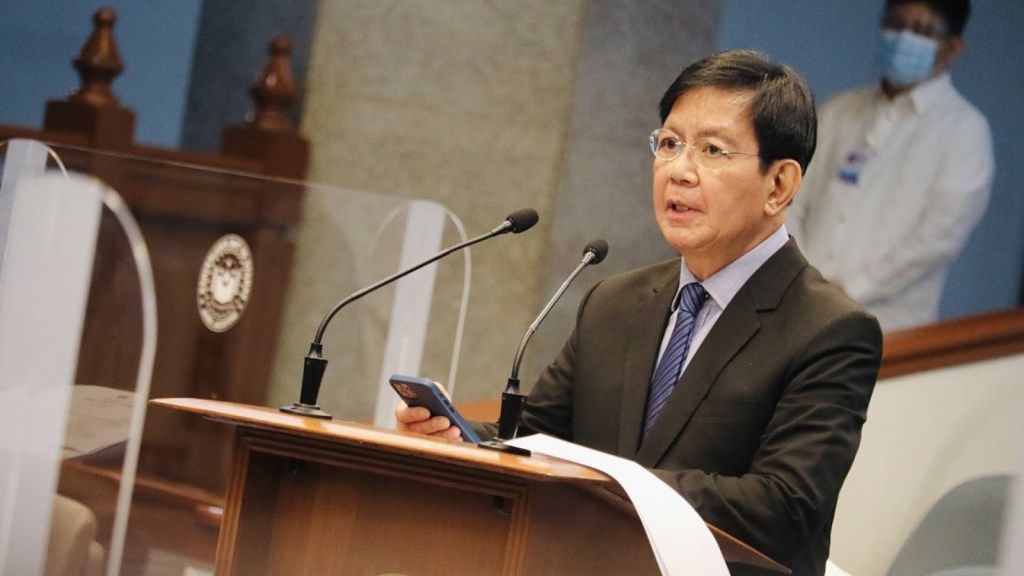 March 17, 2021 - Convening the Senate into the Committee of the Whole will be needed to tackle the wide scope of the problems involving the “tong-pats” mess at the Department of Agriculture, Sen. Panfilo M. Lacson said Wednesday.

Lacson said the issues stemming from the mess include food security and a revisiting of the Food Safety Act of 2013 (RA 10611); foregone revenues; and public health.

“I am recommending that the Senate convene into a Committee of the Whole to handle the investigation. The ‘tong-pats’ mess has an impact on foregone revenue and corruption, food security, and health. The Committee of the Whole is best suited for this, instead of having the Blue Ribbon Committee and Committees on Agriculture, Ways and Means and Health handle it separately,” he said.

“My resolution seeking the investigation in aid of legislation may also seek to revisit Republic Act 10611, the Food Security Act of 2013, to address possible loopholes that are being exploited,” he added in an interview on DZXL radio. “Wide masyado ang problema, all-encompassing. Kaya mas maganda kung Committee of the Whole na lang ang hahawak.”

Last Monday, Lacson bared the “tong-pats” anomaly at the DA, involving tong-pats of P5 to P7 per kilo at present rates of 30-percent tariff on in-quota hog importation and 40 percent for off-quota importation. He said the anomalies amount to a triple whammy that threatens to kill our local hog industry while raising health concerns and costing the government forgone revenues.

“Umiiyak ang ating backyard hog raisers, mga 80,000 sila. Ang industriya ng hog-raising, P230 billion a year ito. Our backyard hog raisers will be adversely affected while the hog industry will die if the local market is flooded with imported pork and pork products – and worse, imported from countries with existing ban due to ASF,” he said.

He said that instead of importing at a high volume, the DA can help our local hog raisers by providing an indemnification fund and similar aid. “Kung ang solusyon ay mag-import ng mag-import, lalo mong pinapatay ang industriya,” he noted.

“Walang patawad. Yan ang nakakainis, parang walang kabusugan,” he added in a separate interview on DZBB radio, referring to those behind the “tong-pats” scheme.

Lacson said one of the questions he aims to ask in the Senate investigation is why the Bureau of Animal Industry’s former head, Dr. Ronnie Domingo, was transferred to the Philippine Carabao Center late January despite having issued permits to import pork from banned countries due to the ASF.

Citing information reaching him, Lacson said that under Domingo’s watch, the violations continued until September 2020. The BAI and National Meat Inspection Service form part of the Minimum Access Volume Management Committee of the DA.

“Without casting doubt on DA Sec. William Dar’s personal integrity, we want to know if he was aware of the situation. That said, while I cannot say at this time if Domingo’s transfer is connected to the issuance of illegal permits, the impact is that we have an ASF problem due to the importation of pork from banned countries,” he said.

“Considering such violations involving Domingo, papayag na lang tayo kung may sangkot, ililipat na lang? What is clear is that the former BAI director was involved in violations until September 2020,” he added.

Lacson also said he wants to find out if there was outside pressure on the DA to recommend the raising of the minimum access volume of pork imports and the lowering of tariffs.

“We want to know if there is outside pressure on the DA. I have received information that there was lobbying. Why would it make such recommendations that could be detrimental to our local hog raisers?” he said.