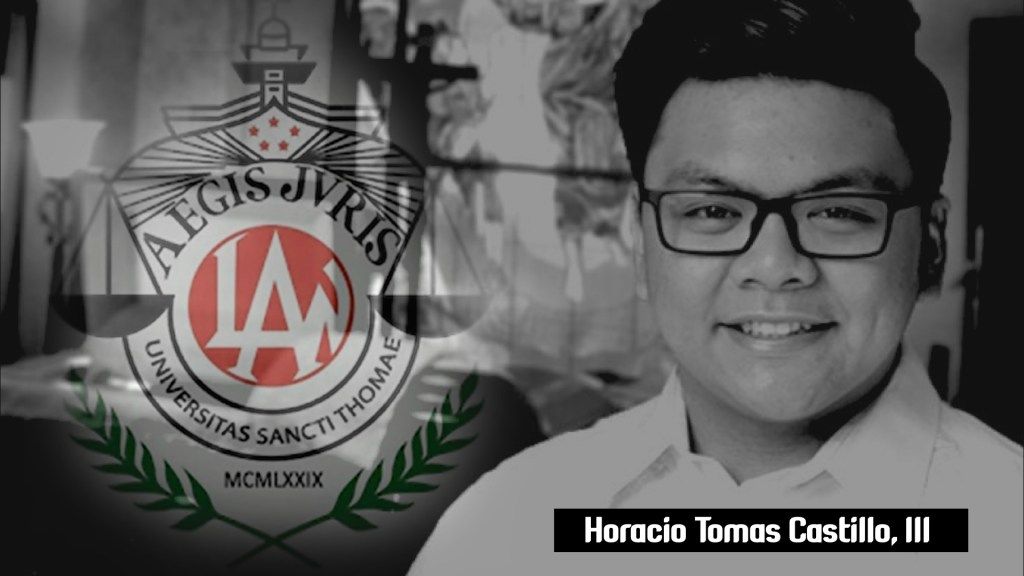 Harsher penalties of up to reclusion perpetua and P3 million in fines are among the measures being eyed to prevent a repeat of deaths due to hazing.

Such higher punishments stemmed from hearings of the Senate Committee on Public Order and Dangerous Drugs chaired by Sen. Panfilo M. Lacson, who presented the committee report on the floor Wednesday.

At the hearings it conducted, Lacson’s committee found that law student Horacio Castillo III died while undergoing hazing rites of the Aegis Juris fraternity based at the University of Santo Tomas.

Investigation showed several fraternity members tried to cover up Castillo’s death, while the school was lax in observing the anti-hazing law.

“Hazing needs to stop now. Awareness must be raised as to the fact that there is no unity, no brotherhood, no strength, no honor, no dignity and no respect in hazing. Hazing is merely violence and abuse,” Lacson said in his sponsorship speech.

Under Senate Bill 1662, the resulting proposed measure, the definition of hazing has been expanded to include “physical or psychological suffering, harm or injury inflicted on a recruit, member, neophyte, or applicant as a form of initiation rite or practice made as a prerequisite for admission or a requirement for continuing membership in a fraternity, sorority or organization.”

It covers actions ranging from paddling to forced calisthenics, exposure to the weather, forced consumption of food, drinks or drugs, and “any other brutal treatment or forced physical activity which is likely to adversely affect the physical and psychological health of such recruit, member, neophyte or applicant.”

Also, it prohibits “all forms of hazing” in fraternities, sororities or organizations in schools, communities and even businesses and uniformed service learning institutions.

The bill requires schools to be “more active and proactive” in regulating school-based initiation rites, with fraternities, sororities, and organizations required to submit and post a written application at least seven days prior to the scheduled date.

Schools are to send representatives to monitor, record and report initiation rites “to ensure that no hazing shall be conducted.”

At least two representatives shall be assigned by the school to see to it no hazing is conducted, and to record the entire proceedings. They face liabilities if they are proven to fail to stop the hazing.

Meanwhile, advisers are to be appointed and are presumed to have knowledge and consent to the commission of any unlawful act in violation of the Anti-Hazing Law.

The initiation rites shall not last more than three days, with the applications containing names of incumbent officers of the organization and those who will take charge in initiation. The application should be posted in bulletin boards and other conspicuous places.

School-based fraternities, sororities or organizations are required to register with proper school authorities, submitting a list of members updated not later than 15 days from the start of the semester or trimester. Non-compliance may mean cancellation of registration.

The schools will have the responsibility to exercise reasonable supervision, taking proactive steps to protect students from danger of participating in activities that will involve hazing. This may include an information dissemination campaign at the start of the semester or trimester.

Community-based fraternities, sororities or organizations shall register with the barangay, town or city officials, and submit a list of members or officers, updated yearly.

Schools can impose disciplinary sanctions up to expulsion to the head and officers of fraternities involved in hazing.

All members of the fraternity, sorority or organization who participated in unauthorized initiation rites, even if no hazing was conducted, shall also be punished accordingly.

Persons who had knowledge of any hazing acts committed but failed to report it to the authorities or those to be found guilty of hiding, concealing or hampering or obstructing investigation should be penalized.

* reclusion perpetua and P2 million on members who actually participated in hazing when under the influence of alcohol or drugs; and on non-resident or alumni who participate in hazing

* reclusion perpetua and P3 million on those who participated in hazing that resulted in death, rape, sodomy, or mutilation

* P1 million on the school if it approved an initiation of a fraternity, sorority or organization where hazing occurred

* prision correccional (six months to six years) on anyone who intimidates or threatens another for recruitment. This includes “persistent and repeated” proposals or invitations to those who refused to join at least twice.

Incumbent officers of the fraternity, sorority or organization concerned shall be jointly liable with those members who actually participated in the hazing.

Meanwhile, the owner of the place where the hazing occurred is liable as a principal instead of accomplice, if he or she failed to prevent or report it.

The judgment of final conviction shall be reflected in the offender’s scholastic or employment record.

Meanwhile, Lacson called for more active participation from all three branches of government against hazing.

“(T)o create an effective deterrent against hazing, active participation from the three great branches of government, namely, the Executive, Legislative and the Judiciary is required,” he said.