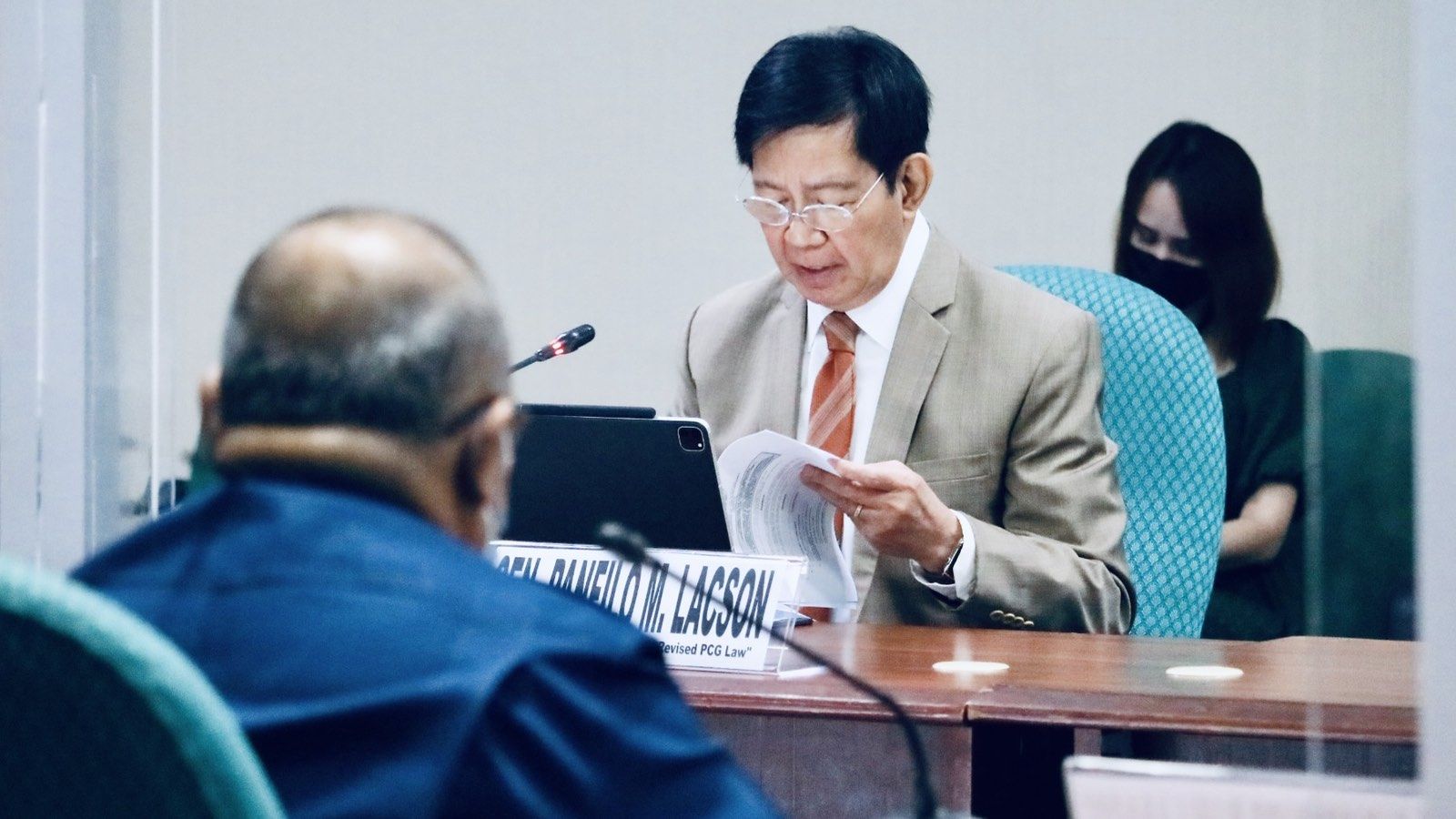 December 8, 2021 - To empower it to protect the Philippines' waters from intrusion and harassment including in the West Philippine Sea - as well as fulfill its other duties as the Philippines' primary maritime agency, the Philippine Coast Guard needs to be strengthened and its gaps addressed.

Sen. Panfilo "Ping" M. Lacson stressed this on Tuesday as he presided over a Senate subcommittee hearing to address the issues in the agency's operational, administrative and organizational concerns.

"While we all point to the Philippine Coast Guard as the primary maritime agency of the government to strengthen our country’s sensitive frontiers in the West Philippine Sea, we can no longer keep the predicaments of the agency at bay," Lacson said.

He added there is a need to discuss the apparent distortion in salaries, allowances, benefits and retirement of the PCG personnel brought about by its separation from the Armed Forces of the Philippines and the subsequent enactment of RA 9993, the Philippine Coast Guard Law of 2009, as well as the system of ranks and pay rate relevant to the Coast Guard.

One issue that needs to be addressed soonest involves the unity of command especially in times of war, when the Coast Guard will be attached to the Department of National Defense under the proposed measure, Lacson noted.

He said the Coast Guard commandant has a four-star rank which is equivalent to the rank of the Chief of Staff of the Armed Forces of the Philippines.

"Who will take primary responsibility over whom? The reality on the ground is that the Navy has a more upgraded military capability compared to the Coast Guard," Lacson noted.

Another issue is the need for the Coast Guard to conduct regular patrols around Pag-asa Island which Lacson visited last Nov. 20 and saw for himself the extent of harassment from Chinese vessels.

The Coast Guard currently does not have the capability to conduct regular patrols, with its nearest available vessel in El Nido, Palawan - and will need hours to reach Pag-asa, the only Filipino-inhabited island in the Kalayaan Group of Islands. It does not expect to regularly patrol the West Philippine Sea until 2022, when it gets new vessels from Japan.

"What if the Chinese Coast Guard vessels attempt to take over Pag-asa, how prepared are we to defend Pag-asa? Pag-asa is the only inhabited island. The others are shoals, classified as not really islands. Pagasa is a barangay under Kalayaan municipality," Lacson noted.

"In the dire possibility the Chinese vessels attempt to attack Pag-asa how would the PCG respond to such a situation? How capable are we to at least put up a decent defense of Pag-asa island?" he added.

Other issues involve the differences in pensions of retired Coast Guard and Navy personnel, as well as the budget needed to enhance the Coast Guard's capabilities.

Such issues, Lacson noted, "come in the foreground of the growing tension in the disputed territories in the West Philippine Sea amid the continuing Chinese intrusions and harassments on our fishermen, and very recently the water-cannoning incident against two Philippine Navy-commissioned supply vessels in the Ayungin Shoal occupied by our gallant personnel on board the BRP Sierra Madre, perpetrated by the Chinese Coast Guard."

Tuesday's hearing of the Sub-Committee of the Senate Committee on Public Services on Senate Bill No. 2322 or “An Act Providing for the Administrative Reform and Reorganization of the Philippine Coast Guard, Revising for the Purpose Republic Act No. 9993, otherwise known as the Philippine Coast Guard Law of 2009,” took up Senate Bill 2265 for the institutionalization of the PCG Auxiliary, authored by Sen. Richard Gordon; and Senate Bill No. 1112, which aims to establish the PCG Academy, authored by Sen. Imee Marcos.

The Philippine Coast Guard traces its roots from the Bureau of Coast Guard and Transportation created in 1901 during the American Occupation. It was created virtue of Commonwealth Act No. 1, on Dec. 21, 1935.