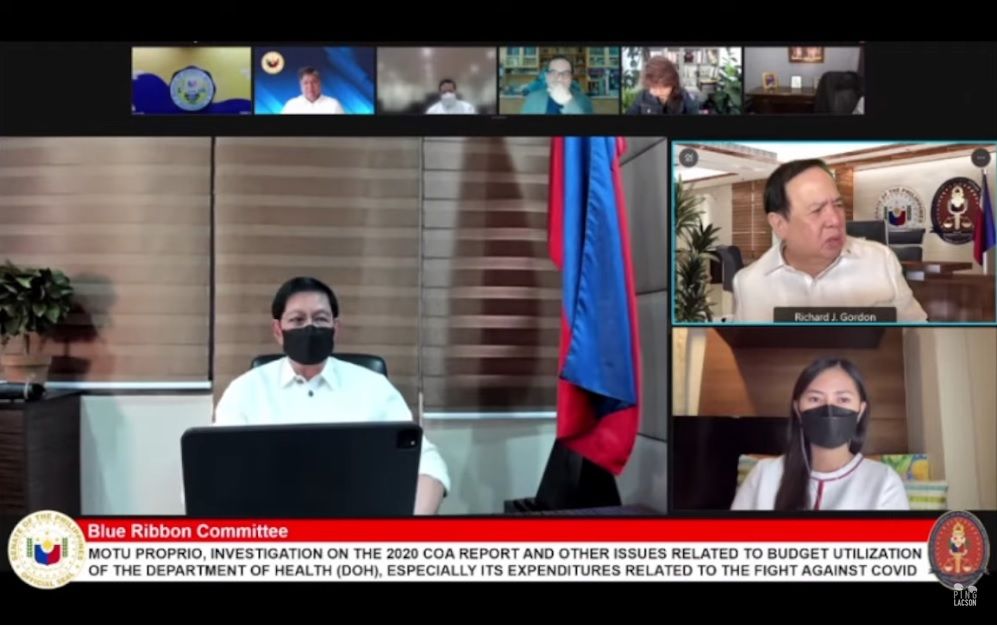 Lacson cited DBM documents indicating that of 45 suppliers, Pharmally grabbed 26.39 percent of the P42 billion transferred by the Department of Health to the PS-DBM.

"Out of 44 other suppliers, Pharmally ang No. 1, and you bagged 26.39% of the P42 billion transferred by DOH to the PS-DBM even with a P625,000 initial capitalization," Lacson told Pharmally Director Linconn Ong at the Senate hearing on the matter.

Other businessmen would have reinvested their money into their business if they made a huge profit, instead of going on a buying spree, he added.

Earlier, Lacson extracted a confession from Pharmally employee Krizle Mago after she admitted she acted on instructions from higher management in having a warehouseman remove the "Expired" labels dated 2020 from face masks, and replace them with 2021 as the new expiry date.

Mago also admitted upon further questioning from Lacson that she acted on orders from Pharmally treasurer Mohit Dargani.

"Who ordered you to give the instruction to the warehouseman to remove the label? I suppose it was not on your own initiative you gave that instruction?" Lacson told Mago, who replied she received the instructions from Dargani.

Mago also admitted she was instructed by higher management to exchange emails with the Department of Budget and Management Procurement Service (PS-DBM) even after Pharmally already delivered overpriced surgical masks "ordered" by the PS-DBM.

"Why did you respond to the PS-DBM's email when the day before, you already delivered what was asked of your company? What was the purpose of sending the response?" Lacson asked.

Lacson also questioned Tigerphil Marketing Corp., from where Pharmally sourced its face masks, how it netted P21.51 million in sales to Pharmally in 2020 when its audited financial statement for 2020 showed it only declared an income of P3.479 million.

"If the Blue Ribbon Committee did not conduct the hearing, would you pay the amended tax returns?" Lacson remarked, adding Tigerphil's payment showed the Senate hearings did lead to positive results.

"Maski papano, nagbayad. So hindi totoong walang nangyayari sa pagdinig nating ito (Tigerphil paid after all, so it's not true that nothing comes out of the Senate hearings)," he added.

Meanwhile, Lacson also questioned how Tigerphil managed to contact Green Trends, from which it sourced its face masks, when Green Trends has a fictitious address.

Lacson also threatened to have Pharmally Director Linconn Ong transferred to the Pasay City Jail after Ong remained evasive in his answers.

He noted Ong had claimed they sold at a high price because of a scarcity of supply, yet Pharmally managed to deliver medical supplies to the PS-DBM in under three hours.

"Pag patuloy nagsisinungaling si Mr. Ong, the committee might decide to transfer him to Pasay City Jail instead of enjoying life in the Senate," he said.