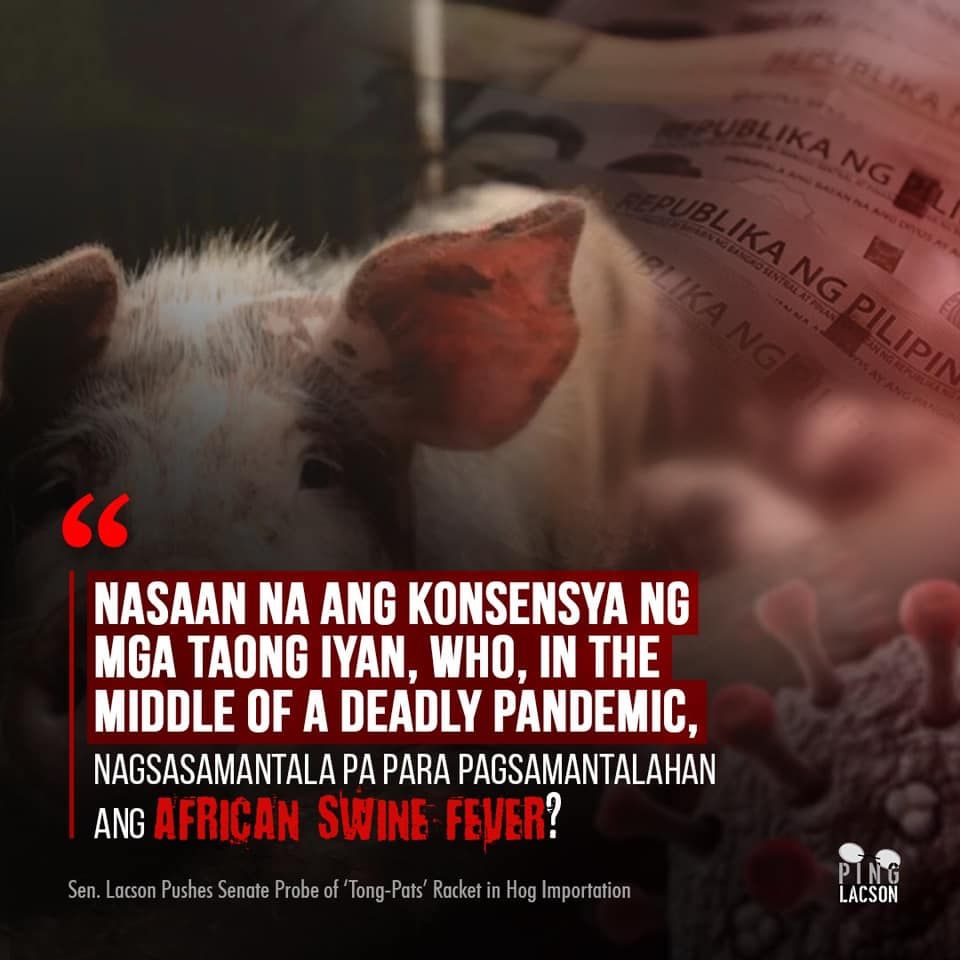 March 16, 2021 - Sen. Panfilo M. Lacson pushed Tuesday for a Senate investigation into the activities of a syndicate within the Department of Agriculture that stands to gain billions of pesos in “tong-pats” from the DA’s recommendation to lower tariff rates on – and to increase the minimum access volume (MAV) of – imported pork products due to the severe impact of African Swine Fever (ASF) on the swine industry.

Lacson said the anomalies amount to a triple whammy that threatens to kill our local hog industry while raising health concerns and costing the government forgone revenues.

“We should unmask who is/are behind this scheme no matter how powerful and influential he may be with this administration. I want to see even a whiff of enthusiasm from the President to order the Presidential Anti-Corruption Commission and other concerned agencies to investigate, not to mention heed the call of the Senate to disapprove the DA’s recommendation to reduce the tariff and increase the volume of pork importation. Let’s see,” Lacson said.

“I have talked to Senate President Vicente C. Sotto III to have the Senate look into this, so we can get the documents we need. So far, we have received documents from the Bureau of Customs and DA. Still, we need more data to get to the bottom of the anomaly,” he added in an interview on TeleRadyo.

Lacson said DA Secretary William Dar should know or at least have heard of the shenanigans within his department, particularly in the MAV Management Committee, headed by Acting Undersecretary William Medrano and composed of the Bureau of Animal Industry (BAI) and the National Meat Inspection Service (NMIS) – along with the “SOPs” in the allocation of quota to favored importers and the issuance of the Phyto-Sanitary Import Clearance (PSIC).

“This practice has been going on for several years now. For example, between June and October 2018, imported pork from banned countries due to the ASF like Belgium, Hungary, Germany and China flooded the local market which prompted the issuance of a memorandum order by then DA Secretary Emmanuel Piñol,” he said.

On the other hand, Lacson cited a letter from the Agricultural Sector Alliance of the Philippines (AGAP) party list to Senate President Sotto on behalf of 80,000 backyard hog raisers, expressing concern that the DA’s proposed increase in pork meat importation by expanding the MAV while imposing a reduced tariff may kill the local industry.

In the letter signed by its president Nicanor Briones, AGAP said that while it is not against importation, 400,000 MT is too much and may cause an oversupply nationwide, while cutting tariff rates may cost the government some P13.95 billion in revenues, and thus “unnecessary and unacceptable.”

Similarly, concerned poultry integrators composed of major producers and suppliers of poultry appealed to Sec. Dar to calibrate the importation of finished chicken products and stay within the MAV limit of 23.4 million kilos per year.

They requested that the DA disallow the continued importation of chicken finished products especially “with diseases that have mostly come from abroad,” adding historical data show increased importation may destroy the local poultry industry.

On Monday, Lacson bared the “tong-pats” anomaly at the DA and urged the PACC to conduct a motu proprio investigation into the setup, as he noted that “we are dealing with public money and possibly foregone revenues.”

“I received this disturbing information from a highly placed source who has knowledge of the modus operandi within the agency that at present rates of 30-percent tariff on in-quota hog importation and 40 percent for off-quota importation, mayroong umiiral na kalakaran na tong-pats or ‘SOP’ of P5 to P7 per kilo,” he said in his interpellation of a Senate Resolution expressing the sense of the Senate to persuade President Rodrigo Duterte to disapprove the DA recommendation.

Such a racket could be considered “COVID corruption” where unscrupulous people take advantage of others even during a pandemic – and thus deserve the worst, Lacson said.

“Covid capitalism vs Covid humanitarianism. In theory, the choice is clear. Unscrupulous people have another choice: Covid corruption. On their day of reckoning, they will burn in hell,” he had said on his Twitter account last Sunday.

The resolution noted imported pork products within the current MAV ceiling of 54,000 metric tons are charged with 30-percent tariff while identical products beyond the MAV quota pay a 40-percent tariff.

It added the DA, seeking to address increasing prices of pork and an estimated supply deficit of 388,491 MT, proposed to increase the MAV from 54,000 MT to 404,000 MT. It also sought to lower the quota tariff rate by as much as 83 percent, from 30 percent to 5 percent if within quota; and from 40 percent to 15 percent if beyond the quota.

Lacson pointed out that if the tariff for importations is brought down and the MAV is increased, the syndicate can jack up its tong-pats from the current P5-7 to P10-15 per kilo – easily earning P4 to 6 billion from the 400,000 metric tons or 400 million kilograms.