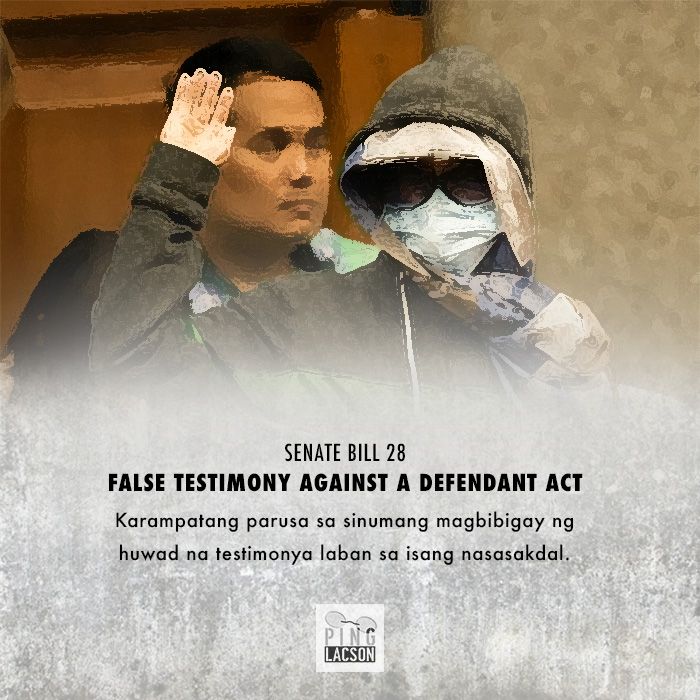 They are all reasons for the need for a stronger law that would impose heavier penalties on lying witnesses – including public officials and employees who may be behind them, Sen. Panfilo M. Lacson said Wednesday.

“Naging tig-singkong duling na lang ang pagsisinungaling under oath sa Pilipinas. That is why there is a compelling need for a stronger perjury law,” he said, stressing this is “a matter of punishing not personalities but the act of giving false testimony.”

Earlier this week, Sabio said he will withdraw the case he filed against President Rodrigo Duterte before the International Criminal Court, reportedly because the case he initially filed was politically motivated.

Last year, Lacson scored P/Maj. Rodney Baloyo for giving false testimony before the Senate investigation on “ninja cops,” and moved that Baloyo be cited for contempt.

On the other hand, Lacson also cited the case of Advincula, who attempted to link the First Family to the drug trade, but recanted his claims and said he was used for political ends.

These are aside from the harassment Lacson personally experienced due to the claims of lying witnesses such as Angelo “Ador” Mawanay in the early 2000s. Mawanay was one of a host of paid witnesses unleashed by the Arroyo administration obsessed with putting Lacson in jail.

“Our present perjury law only carries a prison term of six months up to two years and two months. With a penalty that light, we can expect lying witnesses not only in Senate hearings but even before the courts,” Lacson noted.

In 2019, Lacson refiled a bill seeking heavier penalties against lying witnesses. Senate Bill 28 seeks to give lying witnesses – including public officials and employees who may be behind them – a dose of their own medicine.

“It is noteworthy that because of these untruthful and inconsistent statements, we have witnessed how some men were robbed of their youth and freedom for a long period of time only to be freed later on account that the reason for their incarceration was based on a ‘polluted source,’” Lacson said.

Under the bill, anyone who gives false testimony in any criminal case shall suffer “the same penalty for the felony the defendant is being accused of.”

A public official or employee who ordered such a false testimony shall face the penalty for the felony the defendant is being accused of, in its maximum period – along with a fine of up to P1 million and perpetual absolute disqualification from any appointive or elective position in the government.