Letter to the Editor: Answering some questions in the budget conundrum [Manila Times] 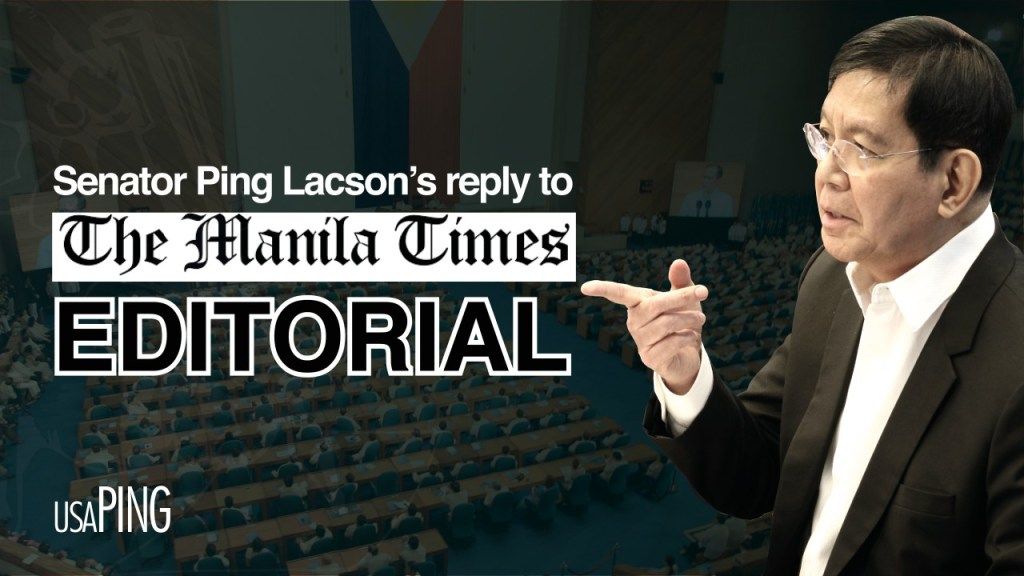 Sen. Lacson’s office answers repeated questions and accusations about the 2019 budget in this letter to The Manila Times‘ April 1, 2019 editorial. The letter sought to answer some questions in the editorial that were addressed to the senator, though it has yet to be published.

First, we thank you for reminding our public of the importance of the national budget, via your April 1, 2019 editorial. Indeed, the budget is no small matter, being the lifeblood of the nation.

Allow us to answer the questions you raised in your editorial – particularly those addressed to Senator Panfilo M. Lacson, whose actions on pork and the national budget are motivated by two things: what is constitutional, and what is legal.

1. On senators releasing to the media their “specific allocations” or amendments to the budget bill: As early as January this year, Sen. Lacson already released to the media, and posted on his website the list of institutional amendments he proposed to the 2019 budget.

He even provided additional details on such amendments in a letter he personally wrote to The Manila Times as his response to the request of erstwhile columnist Francisco S. Tatad via this newspaper’s “From Our Readers” section; but for some reason, his reply was not published.

As Sen. Lacson has repeatedly pointed out, institutional amendments pertain to programs and projects that have undergone planning and vetting, and are based on requests from the implementing agencies concerned. Such amendments are proposed by lawmakers who find merit in them after vetting with the relevant agencies.

The Senator thus takes pride that his institutional amendments benefit no one else but the agencies concerned. Ever since, he has submitted to the Chairman of the Senate Committee on Finance in official written form all his amendments to the annual budget bill for one very simple reason: he has nothing to hide since they are all institutional.

In contrast, individual amendments pertain to projects based mainly on lawmakers’ intervention and are considered legislators’ pet projects. In most cases, these do not involve consultations with the implementing agencies concerned, nor are they part of the Local Development Plans of the Local Government Units. Such programs can be considered pork barrel, based on the 2013 ruling of the Supreme Court that deems as unconstitutional projects that are whimsical and arbitrary. In particular, the Supreme Court ruling covers “all informal practices of similar import and effect, which the Court similarly deems to be acts of grave abuse of discretion amounting to lack or excess of jurisdiction.”

In addition, Sen. Lacson has repeatedly challenged his fellow lawmakers to make public as well their respective amendments. None have so far answered the challenge. Having said that, Sen. Lacson is not in a position to impose on his colleagues.

2. The Senate leaders’ position that the move of the House leaders to “itemize” the P75-billion insertion in the proposed budget was illegal stemmed from Art. VI, Sec. 2, Paragraph 2 of the 1987 Constitution: “Upon the last reading of a bill, no amendment thereto shall be allowed.”

Worse, what the Senate’s Legislative Budget Research and Monitoring Office (LBRMO) later found out belied the House of Representatives’ claims that they merely “itemized” what was discussed and adopted in the bicam. In reality, they actually “realigned” several items which do not at all reflect the agreed provisions incorporated in the bicameral report.

There was a net increase of P95.1 billion in the House of Representatives’ realignments, including a slashed P72.319 billion from the DPWH’s Major Final Output 1 and 2. The House leadership also rearranged/realigned P79.7 billion from several congressional districts to the other districts, and parked P70 billion after removing them from 87 district engineering offices to the DPWH central office in a veiled effort to conceal large “pork insertions” of some congressmen.

DPWH projects affected by this slashing include those that had already been planned and vetted for months, or even years.

As well, the House leadership tampered with the Department of Health’s Health Facilities Enhancement Program (HFEP) funds – where Speaker Gloria Macapagal-Arroyo’s allies got P25 million while those who did not vote for her got just P8 million. Such information was brought to the senators’ attention by no less than the affected House members.

During a meeting between members of the Senate and House with President Rodrigo Duterte last March 12, Sen. Lacson thus suggested that the version of the budget that was ratified by both houses last Feb. 8 be sent to Malacanang, for President Duterte to exercise his line-veto powers. Should the items questioned by the Senate – amounting to P75 billion – be vetoed by the President, the executive branch can draw up a supplemental budget that Congress may take up – all in compliance with the provisions of the 1987 Constitution.

Sen. Lacson’s suggestion was favorably endorsed by Executive Secretary Salvador Medialdea and Finance Secretary Dominguez III to President Duterte as a practical and logical approach to break the impasse, especially when Sen. Lacson informed the President about the House’s slashing the P72.319-billion DPWH MFO1 and 2 appropriations, which will have negative implications on the government’s “Build, Build, Build” program.

On the argument that the Supreme Court’s 2013 ruling outlawing pork objects mainly to post-enactment interference by legislators, please note that the high court’s November 2013 ruling also covers “all informal practices of similar import and effect, which the Court similarly deems to be acts of grave abuse of discretion amounting to lack or excess of jurisdiction.” Realigning items to favored districts, especially without consulting with the implementing agency concerned, certainly smacks of such grave abuse of discretion.

On the point in your editorial that Sen. Lacson “appears to classify as pork any appropriation especially targeted toward legislative districts,” the Senator has also called out such appropriations in the Senate. During the bicameral conference committee meetings, it was Sen. Lacson who pointed out some senators had up to P23 billion in “pork.”

3. As to the question in the editorial on why Sen. Lacson “approved” of the lump sum listing in the budget, he did not. In fact, he expressed both his strong dissent and disgust over it in a privilege speech, moments before the Senate voted on whether to ratify the bicameral report on the budget bill last Feb. 8. Sen. Lacson did not sign the bicameral conference committee report. He likewise dissented when the same was presented on the Senate floor for ratification.

Also during his privilege speech, Sen. Lacson stressed that pork – in all its transformations – “proves that the irresistible lure of money moves men and women of power who should be the guardians of the public treasury, to devise cunning machinations to further their own selfish interests,” and that he will remain “consistent and passionate not only in speaking of it, but in fighting tooth and nail against its rebirth.”

Now that the budget bill is with Malacanang, it is up to the President and his economic team to scrutinize the budget, for the good of the nation.

We hope this finally clarifies matters, especially considering that we have been explaining the Senator’s side on the issue, in reply to the accusations made by some columnists of this prestigious paper, and even if some of them simply refuse to understand and instead insist on adopting an “Ah, Basta!” mentality. They know who they are.

Thank you and best regards.