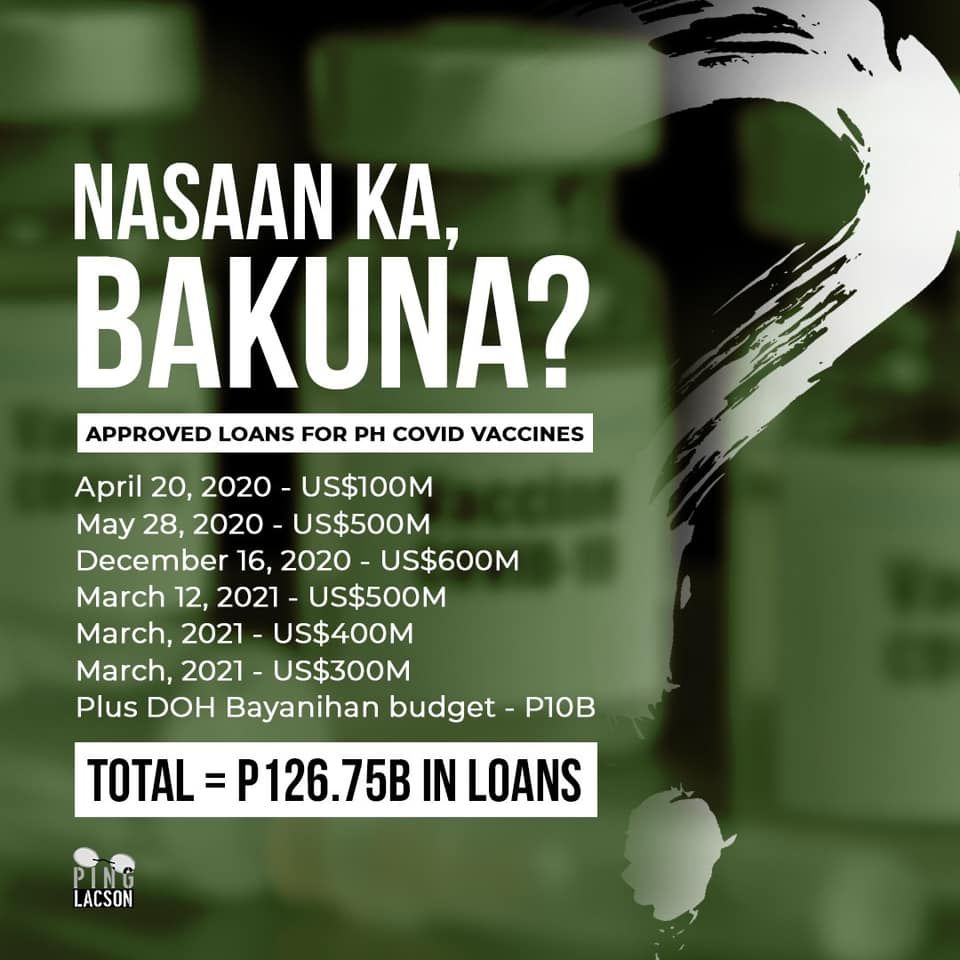 As culled from the World Bank, Asian Development Bank and Asian Infrastructure Investment Bank records and further articulated in a series of official statements from the Department of Finance, we may now have some P126.75 billion in approved loans for COVID vaccines, but the question remains: Where are the vaccines?

Sen. Panfilo M. Lacson raised this question Thursday as he stressed the Filipino people deserve a lowdown from the government on the situation.

Lacson also reiterated his call to the government to treat the private sector as a partner and not as a competitor in the procurement of the much-needed vaccines.

“Magpakatotoo sana, doon muna sa basic. Sabihin lang ang totoo. So long as the concerned authorities do not recognize the problem, we cannot come up with a solution. Bigyan talaga ang lowdown sa Pilipino at maging decisive sana,” he said in an interview on SMNI.

Lacson stressed that he is not asking where the funds from the loans are, since as explained by the DOF during the Senate hearings, the money from the loans can only go to the intended purpose or straight to the suppliers.

Earlier, Lacson noted the World Bank, ADB and AIIB had approved loans to the Philippines for vaccines, including:

But he added that while the Department of Finance has smartly anticipated the “crowding” for loans – and taking advantage of the high credit rating of the country before the coronavirus hit us, so they booked to get ahead of the rush – those in charge of the vaccine procurements did not seem to do their part early enough.

“Finance Secretary Carlos Dominguez III had repeatedly said we have enough funds and the DOF should be commended for having the foresight in taking the initiative to negotiate for the loans much ahead of time. However, no matter how efficient the DOF team is, why did the other team not act early?” he said.

On the other hand, Lacson expressed hope, no matter how improbable the claims of Health Secretary Francisco Duque III and vaccine czar Carlito Galvez Jr., that inoculations could go up to 450,000 a day starting April.

“Let’s make this happen and I will spearhead the adoption of a Senate resolution hailing those in charge of the country’s vaccination program as modern day heroes,” Lacson said in a separate tweet.

Yet, he said the government’s track record suggests otherwise.

“It would be better if our authorities refrain from giving such statements because it is government’s credibility that suffers, and the people will doubt them all the more because they know when they are being taken for a ride,” he said.

Lacson also warned anew against over-regulation, saying the private sector should be tapped as a partner to get better deals. He recalled that when he was Presidential Assistant for Rehabilitation and Recovery (PARR), the private sector greatly helped in the rehabilitation of areas hit by Super Typhoon Yolanda, while bureaucratic procedure slowed the government.

He also said that while both the government and the public deserve some blame for the recent surge in COVID-19 cases, government should have a bigger share of the blame.

“Kung hindi sana nag-overregulate sa pag-procure ng vaccines kasi may pera namang available mula sa approved loans that DOF having the foresight to anticipate the ‘crowding’ took the initiative to negotiate as early as March or April. Sayang,” he said.

He also stressed the need for drastic and innovative steps to address the COVID threat, citing the setup in the United States where federal and state authorities partnered to set up vaccination centers, at the rate of one vaccine per 10 seconds.

“Unless some drastic and innovative steps are undertaken, we might all die waiting,” he added.