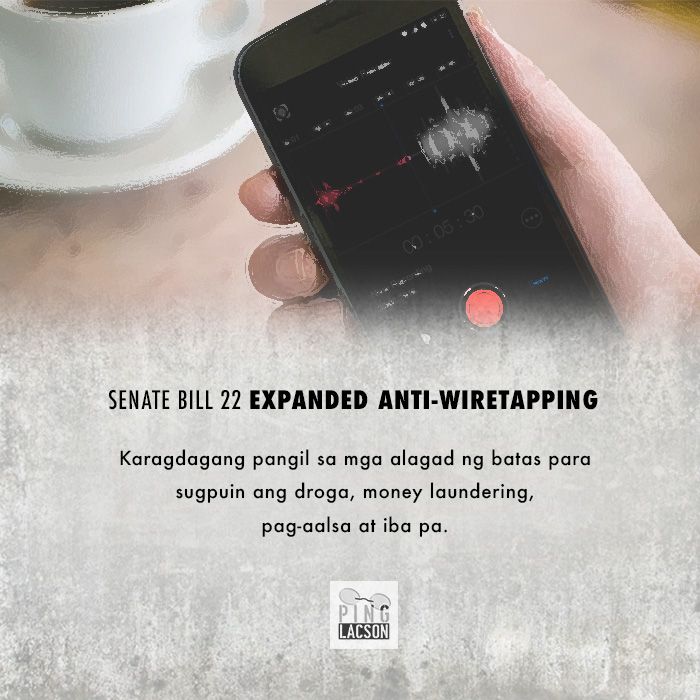 A bill filed by Sen. Panfilo M. Lacson will give law enforcers more teeth against dangerous crimes like drugs, money-laundering and coups, by allowing wiretaps against those involved in such cases.

“With the following exceptions, wiretapping, though limited in its applications, has been an effective tool by our law enforcement agencies against criminal elements who have wreaked havoc, instability and lack of equanimity in our country to the detriment of many of our peace-loving citizens. Unfortunately, there are still certain crimes that are not covered under the said exceptional cases, which put not only the lives and property of our people in paramount danger, but also pose a grave threat to our nation’s security. The peace-and-order situation in the country gives testament to this fact and thus, it is imperative for us to revisit RA 4200 in order to further enhance its effectiveness,” he said.

Lacson’s bill allows law enforcement or military officers authorized by the court to conduct wiretapping against:

The Human Security Act of 2007 also included terrorism and conspiracy to commit terrorism to the list, provided it is with a written order from the Court of Appeals.

Under Lacson’s bill, the court may order telecommunications or internet service providers to cooperate with law enforcement in wiretapping. Unjustifiable refusal may mean a fine of P1 to P3 million.

Also, the bill decrees that the sale or importation of wiretapping equipment may be allowed only upon written authority from the Department of Information and Communications Technology.

Agencies such as the Philippine National Police, Philippine Drug Enforcement Agency, National Bureau of Investigation and the Armed Forces of the Philippines may procure such equipment through limited source bidding or direct contracting as provided under Republic Act 9184.

Meanwhile, those who manufacture, assemble, sell, import or distribute wiretapping equipment without securing the needed permit may face three to six years in jail and a fine of P500,000 to P2 million. Their equipment will be automatically forfeited in favor of the government.

On the other hand, those who conceal, destroy or reveal the contents of wiretapped materials without written authority from the court may face jail of six to 12 years and a fine of P1 to P5 million.