In an interview on ANC, Sen. Lacson answered questions on:

* day of reckoning vs those behind overpricing [7:46]

* DOH and PATTERN OF OVERPRICING:

Sec. Duque’s Claim that the Second Wave of COVID is Here:

“Not only do I not agree. But medical experts have also expressed their disagreement with the statement attributed to Sec Duque that we are now into the second wave, because we have not yet got past the first wave. So how can we way we are already confronting the second wave?”

“Definitely we are not. If the curve continues to go up, and we are basing it even on inaccurate data, I asked him about this during the Committee of the Whole heading in the Senate, why can’t they come up with another data or statistic pointing to the number of cases as tested, on a specific date? Because those tested last May 1, ang result nakukuha 14 days after. It’s not accurate data, they tested 10,000 people last May 1, they should come out with those cases or the infection on that particular date, not 14 days after. If we base our decision in inaccurate data, chances are we’ll be coming up with wrong decisions or wrong conclusions.”

“Fortunately for us the private sector is also purchasing the same items, not necessarily the same brand. But what DOH did was to submit brand-based equipment. Meaning, they submitted to the procurement service of DBM the brand they prefer, which is a no-no. It’s a violation, it’s not allowed under Sec 18 of the Government Procurement Act. Of course we acknowledge that when we passed the Bayanihan Act, it is I think in Sec 4 Par K, to allow the expeditious manner of procuring health equipment. Suspended ang provision ng Sec 18, which does not allow brand-based procurement.”

“It is wrong (for DOH to submit to the DBM procurement service a preferred brand). They are claiming, for example Sansure, this is a brand, and the private sector I think under Project ARK of Go Negosyo headed by Joey Concepcion, they purchased 1 extraction machine, nucleic acid extractor machine, and it cost them P1.75M. DOH when they submitted a brand-based for King Fisher, they purchased 1 unit at P4M. Right away we can see the difference at P4M and P1.75M. They are claiming Sansure is a closed system, which is not true. Because yesterday I confronted Sec Duque, he is claiming they reason they did not purchase Sansure, it’s because it is a closed system, which is not true. Yung Sansure when I did a little research and asked some doctors and medical practitioners, it is compatible with at least 5 other machines. These are technical terms. But it is not true at all that Sansure, which is a brand manufactured in China, is a closed system. That is not true. Giving us false information does not help him.”

“I saw on your file video, Sansure ang gamit ng PRC in their PCR tests. Nakita ko kanina I was watching Sen Gordon. In a file video juxtaposed sa kanyang video itself, nakita ko ang Sansure. So it’s being used. Why would you purchase a P4M extraction machine when you can purchase a P1.75M unit with the same efficiency, claiming the machine branded King Fisher a closed unit but it’s the other way around as Duque claimed yesterday.” 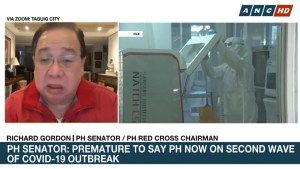 “I also confronted him about that (DOH spending $32 for each swab system, double that of the private sector). I don’t think I got his response correctly. I could not even understand how he explained it. Ang $12 per unit na swabbing system, sabihin natin $16, that’s a 100% difference. DOH purchased the same unit for $32. So there’s a pattern of overpricing. Not this time, we are in the middle of a crisis. We should not be distracting DOH and other government instrumentalities by conducting an investigation. But I think there should be a day of reckoning on all this.”

“Seizing an opportunity out of a crisis is a good thing when you do it for country. For example when we know other locators or factories are relocating from China to other places in Asia, yan ang i-seize nating opportunity. But to seize an opportunity for self-aggrandizement out of a crisis as big as the COVID-19 pandemic I think that’s the height of callousness and greed.”

“They can always come up with all sorts of reasons. But at the end of the day, we see a pattern of overpricing. If it’s only one item then probably it’s been overlooked or they can reason out a different supplier or manufacturer. But it’s a pattern. Every time they procure health products, when you compare it with the purchased price of private sector, remember there are at least 120 business establishments participating in their own swab tests, PCR tests, etc. Maraming kasali rito. So you cannot avoid being compared sa purchase price ng private sector.”

“Ang nare-release so far ng DBM as of April 30, P353.4B… Ang galing sa GAA 2019 and 2020, P351B. And we don’t know how much more DBM will be releasing or allocating to attend to the COVID-19 crisis. There’s unreleased appropriations in 2019 it’s something like P77.1B. Ang P76.9B, ito ang sa government agencies under the executive branch. They are not touching the appropriations for the legislature, judiciary and the constitutional offices. That’s something like P220M. So ganoon kalimitado ang sources and this is a long haul by any measure. We do not know when we will get out of this crisis.”

“I think it’s necessary. At the rate we’re going we cannot be out of this problem by June 24. The Bayanihan Act will expire June 24. And I assume Malacanang and the executive branch, they are already preparing a draft legislation to allow the President to continue enjoying the powers of realigning the budget and all other powers we gave him under the Bayanihan Act, including exemptions from RA 9184 or Govt Procurement Act.”

“I won’t be surprised. Because that’s a different matter. And he’s facing criminal as well as administrative cases on account of the mananita case, while celebrating his birthday. But his performance as NCRPO director is different from that singular act of indiscretion, shall we say. He really set a bad example. And the President I think was thinking along the line of what he has done and what he is doing in implementing the ECQ in NCR. I think the President based his decision to retain him mainly on that. Anyway he’s already facing administrative case before the IAS and criminal case before DOJ or whatever investigating agency there is. So I think the President based his decision on that.”

“Yes I agree (with President Duterte’s decision) but he (Sinas) should not escape punishment for what he did.”

“It cannot be denied that the whole organization, the PNP and NCRPO itself, have been put in a bad light on account of that one singular act of indiscretion. Mali ang judgment because you are implementing ECQ at may naaresto. And then being the head of NCRPO himself, violating the ECQ, hindi talagang magandang example.”

“I only based my tweet on the observation that some netizens even went to the extent of posting out-of-date photos or videos. Sabi ko a little compassion; he’s getting it already, why rub salt to injury? Because by going to the extent of posting out-of-date videos that happened before his birthday celebration, so medyo cruel na yan di ba? Make no mistake. I’m not saying he should be absolved doon sa dapat punishment na matatanggap niya sa kanyang ginawa. And I made it very clear.”

“First we were surprised that the HOR, with all due respect, did the first and second reading all in one day. That’s a clear violation of Sec 26 Art VI of the Constitution. And we were more surprised it was recalled and they would now deal with the 12 pending bills in the committee of Rep Alvarez. And the Senate is just waiting for the HOR to transmit the HOR version. We cannot sponsor on the floor a franchise bill without the HOR transmitting to us their version. That’s also clear in the Constitution because a private bill such as a franchise bill must originate from the HOR. So we’re just waiting for the HOR to transmit to us. And I assure you based on the sentiments already expressed formally, informally or casually by most of my colleagues, I assure you once it reaches the Senate, it won’t take too long to have the franchise of ABS-CBN approved.”