November 17, 2020 - In his interpellation of the DILG’s proposed P244.309B budget for 2021, Sen. Lacson sought to restore the Quick Response Funds for the PNP and BFP, whose personnel have been frontliners even at the height of the COVID-19 pandemic. Sen. Lacson also proposed possible amendments to the PNP Law to raise entry-level salaries particularly for its lawyers, doctors and chemists.

In response to Sen. Lacson’s questions, Senate Finance Committee Chairperson Juan Edgardo Angara said the PNP has a total manpower component of 202,440 uniformed personnel and 12,041 non-uniformed personnel as of Aug. 31, 2020. This means a police-to-population ratio of one police officer for 543 people. 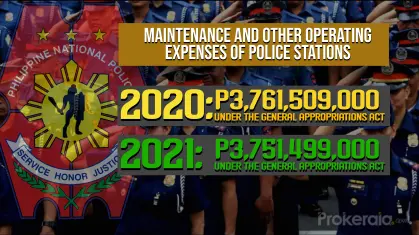 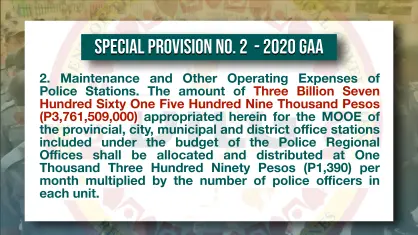 Sen. Lacson also received confirmation that the PNP under new chief Debold Sinas will seriously implement the 15-85 ratio in the distribution of personnel, logistics and financial resources between headquarters and field units – a policy Sen. Lacson initiated when he headed the PNP from 1999 to 2001. “I know the ‘pulis patolas’ of the world, those pounding the beat in the streets, the intel operatives are practically the cannon fodder of the police force and they deserve all the resources they need to be productive. And without excuse to extort for their operations and other administrative needs,” Sen. Lacson said.

“And that’s a sound policy to really download resources to the lowest level of command. So I’d like to commend the CPNP for strictly and seriously implementng the 15-85 ratio in the distribution of resources,” Sen. Lacson said.

Sen. Lacson pushed for the restoration of the QRF of the PNP and BFP. “Because these are the frontliners, even at the height of the COVID-19 pandemic.”

He questioned why there is no budget for the QRF for 2021, noting there was such a budget in the 2016 budget – P75M for the PNP and P75M for BFP. Sen. Angara explained there was an appropriation in 2015 but the PNP said it was never released as the “requirements were quite stringent.” 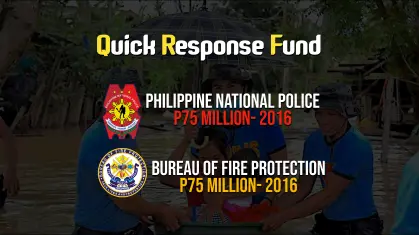 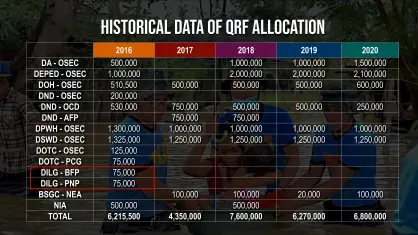 “With your consent and the consent of our colleagues Mr. President, I will introduce that amendment to restore the QRF specifically for the PNP and BFP,” Sen. Lacson said, after Sen. Angara said the PNP would need around P125M, and the BFP would need some P75M for 2021.

In seeking the restoration of the QRF, Sen. Lacson cited instances of PNP personnel responding to calamities. “In Taal for example I heard at least 6 of their personnel got afflicted with some disease sa lungs because of the sulfur.” Sen. Angara explained the PNP and BFP make do sometimes by making requests with the NDRRMC but the review and processing of requests takes time. “They would appreciate very much if the body were to augment these funds,” he said.

Sen. Lacson received an assurance the DILG will be ready to submit the list of LGUs hit hard by Typhoons Quinta, Rolly, and Ulysses, if P20B is augmented to the ALGU-LGSF for 2021 via the proposed Disaster Rehabilitation and Reconstruction Assistance Program for LGUs. “Suppose we augment the budget with another P20B for that purpose, are they prepared to submit the menu list, or the list of LGUs hit hard by 3 devastating cyclones, Quinta, Rolly and Ulysses?” 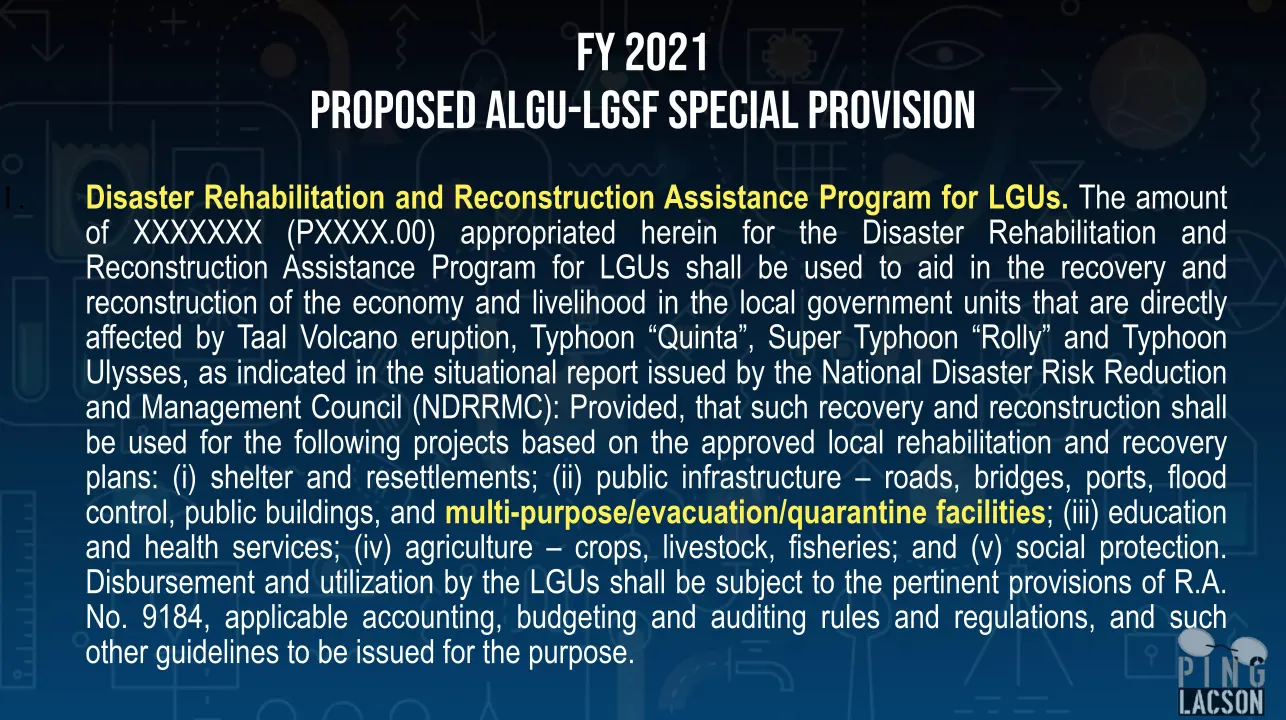 But Sen. Lacson stressed that under Sec. 12 of RA 10121, “there shall be established an LDRRMO in every province, city and municipality; and a BDRRMC in every brgy which shall be responsible for setting the direction, development, implementation and coordination of DRRM programs in their territorial jurisdiction.” 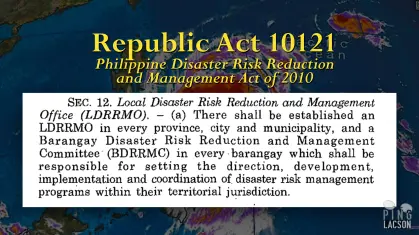 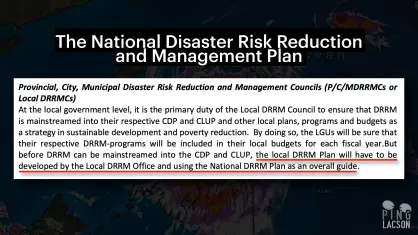 “Now if and when, and knock on wood, if and when we manage to haggle for the augmentation of P20B to the LGUs hit by the typhoons, dapat alam din natin kung papaano sila gagawa ng rehab and reconstruction plan through their LDRRMO and how they can initially make their PDNA (Post-Disaster Needs Assessment)? These are requirements,” he said, adding they must be ready to submit their own rehab and reconstruction plans for the NDRRMC’s approval.

Possible Amendments to the PNP Law:

Sen. Lacson also indicated the need for possible amendments to the PNP Law to raise entry-level salaries particularly for its lawyers, doctors and chemists. “The Chief, PNP is requesting for a legislation in this regard.”

He added the PNP Law can be amended “so they can recruit more lawyers, more doctors and more chemists.” Sen. Lacson noted the PNP presently has only 125 chemists to attend to 300,000 cases. “You can just imagine sa court hearings pa lang ubos oras nila at kung di sila maka-attend, contempt ang aabutin nila sa court. This is the predicament the PNP is in right now. I promised the Chief, PNP at our end we’ll do our part to introduce that legislation.”