Sen. Lacson chaired the Senate hearing on red-tagging and red-baiting, as chairman of the Senate Committee on National Defense and Security, Peace, Unification, and Reconciliation.

Let it be said that your Committee on National Defense and Security, Peace, Unification and Reconciliation derives no pleasure in conducting this public hearing.

When no distinction has been made between an activist and a terrorist; an idealist and an extremist; a reformist and a subversive, we risk putting everyone under a cloud of suspicion; and our society in a constant state of insecurity.

Today, by virtue of Senate Resolution No. 559, this Committee hearing is convened to exercise its oversight authority over the defense sector on the issue of red-tagging or red-baiting of certain personalities, institutions, and organizations.

To say the least, the alleged red-tagging is a crisis in itself. Rightly or wrongly, it stirs public outcry and imperils our conscientious effort to uphold and protect human rights in the country while strengthening our law enforcement measures.

These issues most unfortunately transpire in the foreground of the passage of the Anti-Terrorism Act of 2020 and the vigorous efforts of the National Task Force to End Local Communist Armed Conflict (NTF-ELCAC) – both of which give our military and police personnel the necessary tools to fight terrorism on one hand as well as local communist insurgency on the other.

Hence, as I have repeatedly done in the recent past, let me be forthright by saying that as one of the authors and the principal sponsor of the Anti-Terrorism Act of 2020, we ensure that the same is applied correctly and appropriately with utmost respect for the rule of law, and that the Bill of Rights under the 1987 Constitution will always be the backbone of this legislation.

This is the reason why we gather here this morning – with the end in view of crafting proper guidelines in order to prevent any misunderstanding between the public and our law enforcers and ultimately, to ensure the protection of the constitutional rights of the people in general. We also need to be reminded that as we continue to struggle against the longest insurgency problem in the world, the CPP-NPA, while listed as a terrorist organization by foreign jurisdictions such as the US, UK, Australia, Canada and New Zealand, and one supra-national jurisdiction namely, the European Union, is not in the list of the UN Security Council by virtue of UNSC Resolution 1373. In the Philippines, there is a pending proscription case against the organization before the Manila Regional Trial Court.

For the record, aside from official notices delivered by the Committee Secretariat last Oct. 30 to the different progressive militant groups – Bayan Muna, Alliance of Concerned Teachers, Kabataan, Gabriela, while properly received, did not confirm their attendance for still unknown reason until now.

We also sent an open invitation last week to the representatives of the Makabayang Koalisyon ng Mamamayan (Makabayan) bloc of the House of Representatives to voluntarily attend this public hearing. The letter was coursed through the Speaker of the House, considering that the Committee cannot issue the said invitation directly to individual party-list representatives in view of the inter-parliamentary courtesy existing between the two chambers. 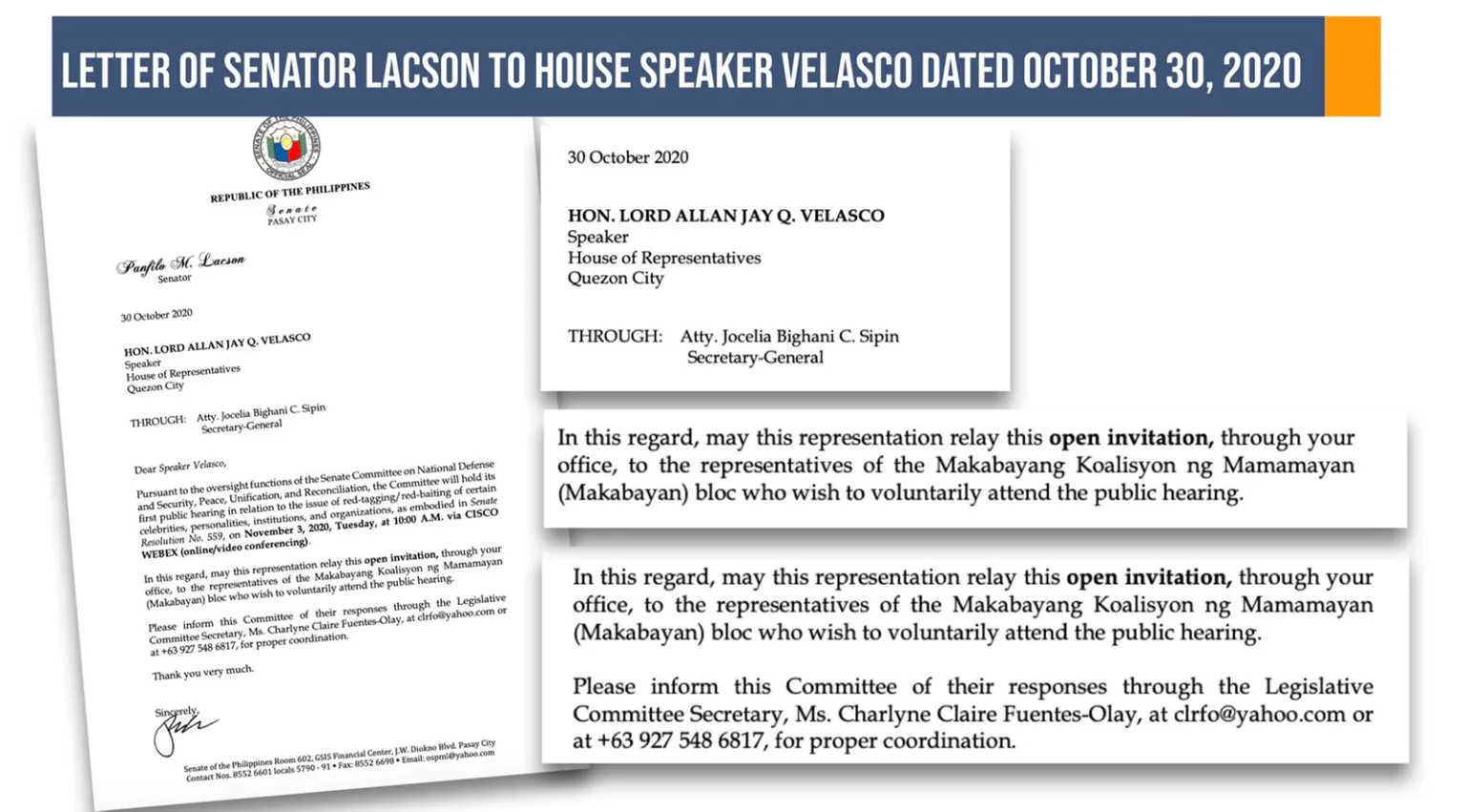 Having said that, we received a letter from former Rep. Neri Colmenares requesting that another hearing be held so he may be given an opportunity to attend, but without the presence of the members of the security sector, particularly Lt. Gen. Parlade. The chair may have to discuss this with the members of the committee. 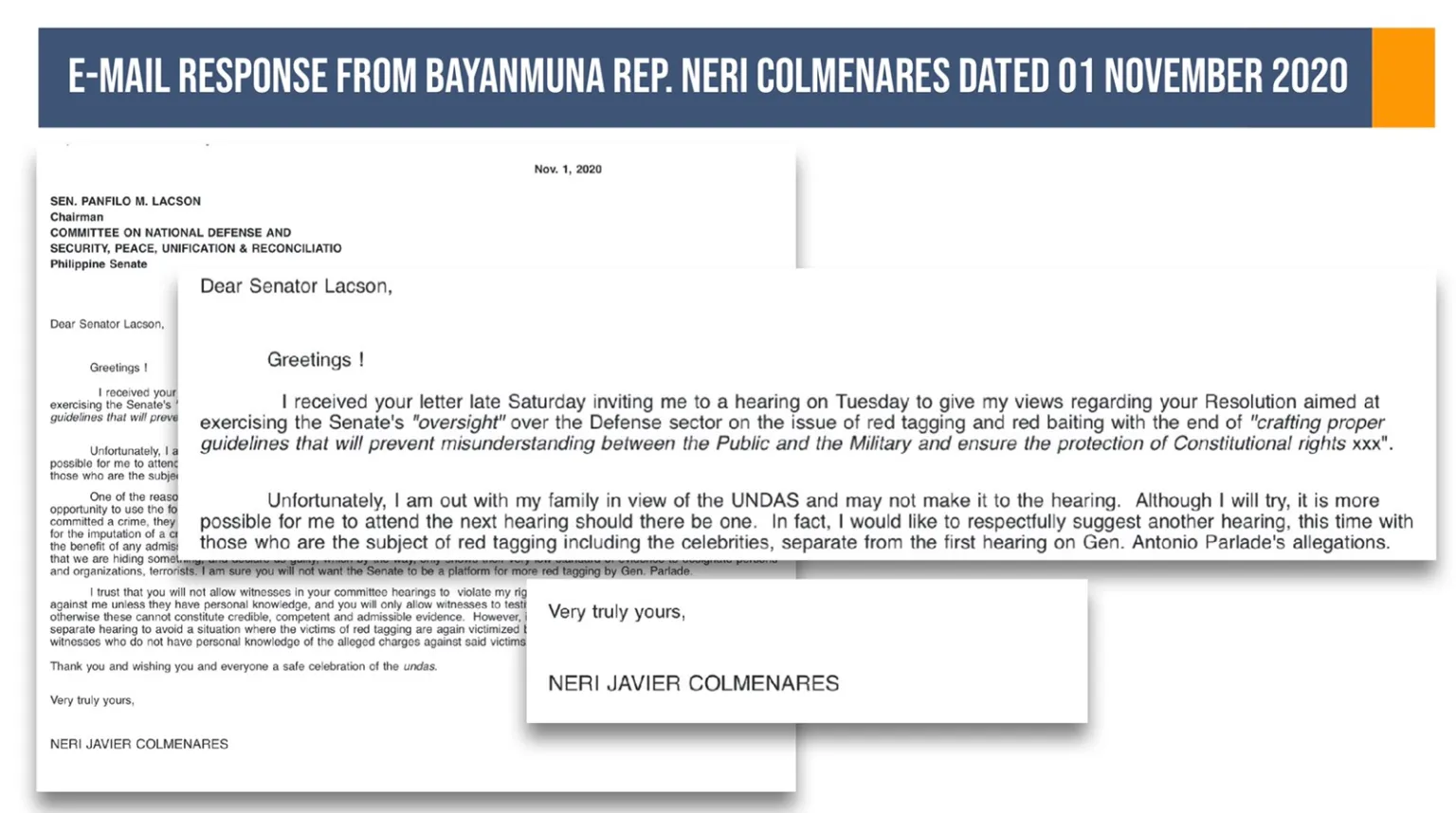 With the presence of the leaderships of the Defense and Interior Departments as well as the Armed Forces of the Philippines (AFP) and the Philippine National Police (PNP); respective members of the Executive Department; and the legal counsel of the progressive political party lists – I understand Atty. Maneeka Sarza will act as the legal counsel for the Makabayan bloc – this hearing intends to deliberate on the root of the ‘conflict’ on red-tagging and other related matters of national concerns – a raging complex issue between state actors and progressive groups. To this end, let us begin.

* Peace Efforts with CPP-NPA-NDF at the Local Level:

Celiz narrated how the NPA gets a “cut” from infrastructure projects, makes telcos pay at least P200M every year, and makes P300-400M from the “NGO racket.” “I’m telling you, that’s an open secret,” Sen. Lacson replied.

Also, Celiz said the CPP-NPA circumvents the AMLC by establishing a web network of conduit NGOs that can channel funds amounting to P300-400M coming from partners from countries, including from Europe. “Do you have a list of NGOs na naging conduit to circumvent? You don’t need to tell this committee right now. Pwede i-submit sa committee,” Sen. Lacson said.

Sen. Lacson told security officials it seems they are losing the “propaganda war,” both on the domestic and international fronts. “This is a battle for the hearts and minds of Filipinos,” he said.

Also, Sen. Lacson questioned Lt. Gen. Parlade over his social media posts involving a celebrity that may be “subject to so many interpretations.” During the exchange, Parlade clarified he never said actress Angel Locsin was an NPA. “I’m glad you mentioned Angel is not an NPA. I’ll make a disclosure: Her fiancé Neil Arce is a family friend. Pag kinasal yan kukunin akong ninong. I’m just making a disclosure. Mabuti kwentas klaras,” Sen. Lacson said.

Sen. Lacson urged security officials to bolster their claims linking alleged fronts to the CPP-NPA by presenting documentary evidence. “As of now, puro words naririnig natin, testimonies. I’m not saying we’re doubting them (but) what more could convince us kung merong document that could buttress yung testimonies na pinapahayag dito?” He added they can submit such documents to the Senate defense committee. “Ang security clearance namin, mataas.”