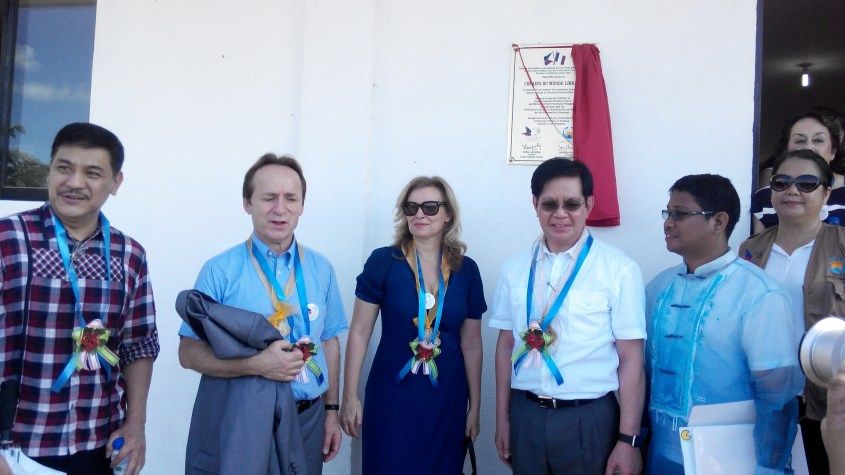 Buddhist philosopher Daisaku Ikeda once said, and I quote: “There are no greater treasures than the highest human qualities such as compassion, courage and hope. Not even tragic accident or disaster can destroy such treasures of the heart.”

One thing is true: we are in an era of new struggles and undertakings of two extremes – climate change and Islamic fundamentalism; threats from natural calamities at the unprecedented scale of Typhoon Haiyan and the shattering of peace through extremist terrorist activities, like the recent horrendous and coordinated attacks in Paris.

Such trails of chaos spared neither the Philippines nor France.

Let me stress: climate change and global terrorism are one and the same as they both pose challenges in a universal scale against us and our future generations.

Hence, we should not allow these threats to weaken our human qualities. Instead, we should showcase a united front: we need to exercise the fullest measure of both national and globalized solidarity.

Today, we are coming to such meaningful shift.

In fact, the ongoing 2015 Paris Climate Conference or COP21 has achieved momentous gains in our fight against global warming. For the first time in over 20 years, global leaders are in full swing in achieving a legally binding and universal agreement on climate change management.

This is also the reason why we are here today. We gather to experience humanity through solidarity that transcends through races, languages, and nations. 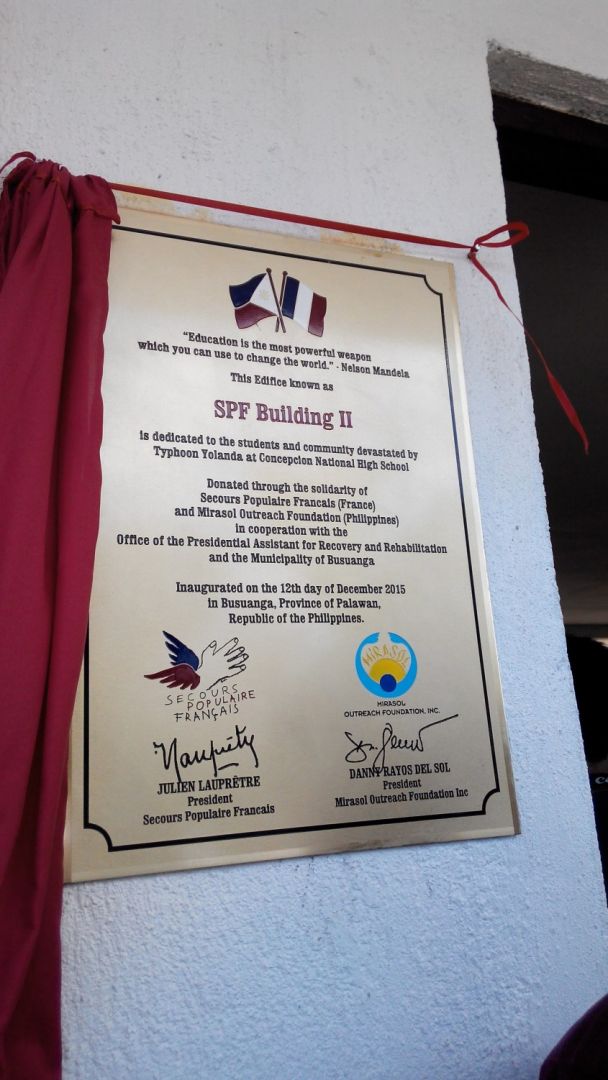 The evident progress in Busuanga bears witness to this with Mirasol and SPF as key institutions that push forward significant rehabilitation programs.

This is an opportune time to thank the Secours Populaire Francais on behalf of our people in general, and those along the Yolanda corridor, for serving us exemplarily well from the relief phase up until the rehabilitation efforts in order to help alleviate the suffering of the typhoon survivors.

Suffice to say that two years ago, this very place was a havoc, and the locals bore the brunt of the strongest category-5 typhoon in recorded history.

Typhoon Yolanda, with international name Haiyan, cut a swath of devastation across the central part of the Philippines, killing 6,300 people and severely affecting more than 1.4 million families.

Amid these, President Benigno S. Aquino III offered me a job anyone with a heart that bleeds for the less fortunate and the downtrodden would not think even for a second to refuse. I know that feeling for sure because I was there.

For one, I never bothered to ask the President what authority I would be given to have the task done. My friends would ask me if I felt like a fool for not even asking our President for something quite similar to the near absolute power and authority of Pak Kuntoro, Indonesia’s rehabilitation czar who rebuilt Bandah Aceh from the ruins of the December 2004 tsunami.

And I remember telling my friends: if it was a war mission offered, I would have definitely asked how much firepower and logistics I had at my disposal before accepting the job. But since it was for a purely humanitarian cause, you and I will agree: such questions, much less demands, become irrelevant.

Hence, what I have was a mandate to develop a rehabilitation plan with a proposed budget, without authority to implement or manage funds. Still, just like what a typical Filipino with scarce resources would do, I made the ends meet.

During my stint as PARR, among the gaps that we have had anticipated were the hurdles in the bureaucracy across all government institutions, as well as 2 or 3 uncooperative departments. With that in mind, I immediately called upon the private sector, non-government institutions, civil society organizations, and invited them to become Development and Sectoral Sponsors.

Development Sponsors were asked to monitor the overall strategic plan of rehabilitating each of the 24 Areas for Intervention and Development (AID), composed of the 171 highly affected cities and municipalities.

On the other hand, Sectoral Sponsors worked with our office to deploy their efforts and resources to four high priority sectors, namely: Housing, Health, Education and Livelihood.

Mirasol Outreach Foundation Inc. was among our Sectoral Sponsors, with priorities given to the education sector.

It was on the 8th of June 2014 that the municipality of Busuanga signed a Memorandum of Agreement with Mirasol Outreach Foundation for the development of their multi-purpose hall.

In just a span of five short months, on December 14, the newly-constructed multi-purpose hall was inaugurated in Old Busuanga.

Truly, Typhoon Yolanda taught us many lessons – mostly about the generosity of the bleeding heart. Indeed, when that heart bleeds, it forgets its race, color, age and language. As Yolanda made no distinction among race nor gender nor one’s social stratum, so, too, were our combined human response to its victims.

My encounters with the important social actors led me to bear witness to human interaction in ways that uplift our condition permanently.

From significant efforts during the relief operations to the great humanitarian commitments and pledges of other countries for rehabilitation and recovery, it was then and there when I realized that private sector stakeholders, like Secour Populaire Francais, with their local partner, Mirasol Outreach Foundation Inc., are definitely among the prime movers for the nation.

True enough, the contributions of the private sector in the Yolanda-affected areas attest to its invaluable role in the rehabilitation and recovery.

I could not overemphasize this: rebuilding the Yolanda Corridor goes beyond rebuilding “physical” devastation. If we are to make a meaningful impact upon the lives of our countrymen in the Yolanda-devastated areas, building back our country better requires us to acknowledge how interconnected public institutions and infrastructure are to human perception, human knowledge, and human consumption.

Building back better requires us to measure, weigh, and assess how intangibles such as education, are linked to social equity.

These include community thresholds of knowledge, skills and skill sets, and the overall quality of education in the Yolanda Corridor.

Hence, today, we are not simply turning over two one-story school buildings with a total of 8 classrooms, we are also raising the premium of education for the youth of Busuanga.

You have rebuilt not simply the structures of Concepcion National High School, but most importantly, the faculties and potentials of its students.

To Mirasol and SPF, I wish to thank you once again for all the great deeds and works you have done, and continue to do to for our children.

We are born at this cardinal time for so great an opportunity of service, and also an opportunity for learning. As we celebrate our commitment to education, symbolized by the turnover of these structures and educational materials, may we recognize that surviving and recovering from Typhoon Yolanda is also an educational process for our country, and I dare say, for the whole world.

I could not think of a better way to end this short message than by sharing with you a relevant quotation from American industrialist Henry Ford. He said, and I quote:

Again, thank you very much and Mabuhay!