March 11, 2020 - Mr. Chairman, distinguished members of the Commission on Appointments, this Representation as Chairman of the Committee on Foreign Affairs, presided over a public hearing this morning to deliberate on the nominations of three Ambassadors Extraordinary and Plenipotentiary of the Department of Foreign Affairs.

The Committee likewise deliberated on the ad interim appointments of 10 Senior Officers of the Department of Foreign Affairs promoted to the rank of Foreign Service Officer II.

Your Committee, after deliberating on their qualifications and fitness during the public hearing, determined that those who are with us in the plenary today are fit and qualified to be in the posts where they are nominated and appointed, and therefore ruled to recommend to the plenary their appointments for the consent and approval of this body.

It is therefore my honor and privilege to recommend that the Commission give its consent to the nomination of the following Department of Foreign Affairs Senior Officers, namely:

AMBASSADOR MILLICENT CRUZ-PAREDES. A lawyer by profession, our appointee started as the managing partner of a private law firm before joining the Philippine Foreign Service in 1995. She was formerly a Consul at the Philippine Consulate in New York, United States of America from 2002 to 2008 prior to her appointment as the Chief Coordinator at the Office of the Secretary of Foreign Affairs. 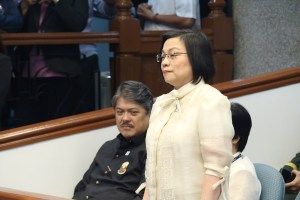 In her more than two decades of diplomatic service, she has gained recognition for her professional competence and organizational skills. In fact, she was credited for effectively managing the Department’s budget, accounting, and auditing operations during her stints as the Acting Assistant Secretary of the DFA’s Office of Fiscal Management from 2010 to 2012, and most recently, as the Assistant Secretary of the Internal Audit Service from July to December 2018.

Mr. Chairman, it is my privilege and honor to recommend that this body give its consent to the nomination of AMBASSADOR MILLICENT CRUZ-PAREDES as Ambassador Extraordinary and Plenipotentiary to the Kingdom of Thailand and Permanent Representative to the United Nations Economic and Social Commission for Asia and the Pacific, with the salary and emoluments of a Chief of Mission, Class II.

Mr. Chairman, it is my honor and privilege to recommend to this august body to give its consent to the nomination of MR. RODOLFO DIA ROBLES as Ambassador Extraordinary and Plenipotentiary to Canada with the salary and emoluments of a Chief of Mission, Class I. 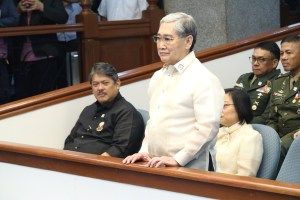 Atty. Robles distinguished himself with exceptional credentials, including his feat as the 1967 Philippine Bar topnotcher. He is known as the author of Miranda Doctrine, the Constitutional Rights of an Accused under custodial investigation as well as the law creating the Office of the Ombudsman, earning for himself the moniker as the Father of Filipino Ombudsman or Tanodbayan.

Mr. Chairman, it is my honor and privilege to recommend that this body give its consent to the nomination of ATTY. RODOLFO DIA ROBLES as Ambassador Extraordinary and Plenipotentiary to Canada with the salary and emoluments of a Chief of Mission, Class I.

At this point, Mr. Chairman, I would also like to recommend to the Commission the confirmation of the ad interim appointments of the following officials to the rank of Foreign Service Officer II: