Sponsorship Speech for Foreign Service Officers at the Commission on Appointments

March 4, 2020 - The CA Committee on Foreign Affairs chaired by Sen. Lacson took up the appointments and nomination of foreign service officers, including:

* 1 appointed to the rank of Chief of Mission, Class I

* 1 appointed to the rank of Chief of Mission, Class II

* 1 appointed to the rank of Career Minister

* 18 appointed to the rank of Foreign Service Officer, Class II

﻿﻿Mr. Chairman, distinguished members of the Commission on Appointments, this Representation as Chairman of the Committee on Foreign Affairs, presided over a public hearing this morning to deliberate on the nominations of two Ambassadors Extraordinary and Plenipotentiary of the Department of Foreign Affairs, and one Foreign Service Officer Class IV.

Your Committee, after deliberating on their qualifications and fitness during the public hearing, determined that they are fit and qualified to be in the posts where they are nominated and therefore ruled to recommend to the plenary their appointments for the consent and approval of this body.

It is therefore my honor and privilege to recommend that the Commission give its consent to the nomination of the following Department of Foreign Affairs Senior Officers, namely: 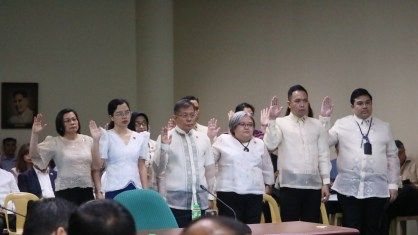 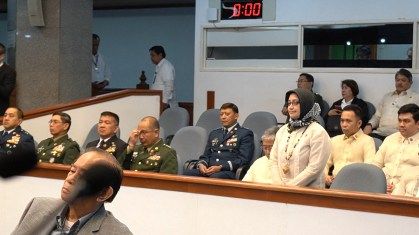 AMBASSADOR IMELDA MACAPUNDAG PANOLONG. The subject-nominee joined the Department in 1991 as a contractual employee under the Office of Cultural Affairs and Public Information Services. For 28 years, she modestly built her career in the foreign service organization, having completed her tours of duty in Islamabad, Pakistan as Third Secretary and Vice Consul; Manama, Bahrain as the First Secretary and Consul; Toronto, Canada as the Deputy Consul General; Jakarta, Indonesia as Minister and Consul General; Los Angeles, California as Deputy Consul General; and Jeddah, Saudi Arabia as Consul General until her current nomination as Ambassador to the Sultanate of Oman.

Among her academic and career distinctions, she is most notable as the first Muslim woman in the Philippine diplomatic corps to be promoted to the rank of Career Minister and later, Chief of Mission, Class II.

Mr. Chairman and distinguished colleagues, it is my privilege and honor to recommend that this body give its consent to the appointment of AMBASSADOR IMELDA MACAPUNDAG PANOLONG as Ambassador Extraordinary and Plenipotentiary to the Sultanate of Oman, with the rank and emoluments of a Chief of Mission, Class II.

Our second nominee is an economist and public servant who has been in government service since 1973. He held several positions at the National Economic and Development Authority (NEDA) until 1979, when he started his diplomatic service career as Foreign Service Officer IV.

AMBASSADOR ENRIQUE AUSTRIA MANALO is well-reputed in the foreign service and was even remarked as “a quiet but seasoned diplomat who has dealt with diplomatic crises, including the South China Sea disputes, with impressive calmness…” He served the Department in many capacities, including his subsequent stints as the Ambassador to the Kingdom of Belgium and the Grand Duchy of Luxembourg, to the Republic of Ireland, and to the United Kingdom of Great Britain and Northern Ireland.

Most recently, he also assumed the post as Acting Secretary of Foreign Affairs from 08 March to 17 April 2017.

As testament to his long and excellent display of leadership and professionalism, he was conferred with the Order of Lakandula, Rank of Bayani in 2018 by President Rodrigo Duterte; and in 2017, the Felipe Agoncillo Lifetime Service Award (FALSA) by the DFA and the Gawad Mabini Award with the rank of Dakilang Kamanong.

Mr. Chairman, it is with distinct privilege and honor to recommend that this body give its consent to the nomination of AMBASSADOR ENRIQUE AUSTRIA MANALO as Permanent Representative of the Republic of the Philippines to the United Nations in New York, United States of America with the salaries and emoluments of a Chief of Mission, Class I.

At this point, Mr. Chairman, I am honored to recommend to this Commission the confirmation of the ad interim appointment of MR. JOSE MARIA ANCHETA CARIÑO to the rank of Chief of Mission, Class I.

Mr. Chairman, I likewise recommend to this august body the confirmation of the ad interim appointment of MS. MYLA GRACE RAGENIA CATALBAS MACAHILIG to the rank of Chief of Mission, Class II.

Mr. Chairman, I recommend to the Commission the confirmation of the ad interim appointment of MR. ARNEL MARCOS SANCHEZ* to the rank of Career Minister.

Mr. Chairman, I likewise recommend to the Commission the confirmation of the ad interim appointments of the following officials to the rank of Foreign Service Officer, Class II:

And last but not least, Mr. Chairman, it is also my distinct privilege to recommend that this body give its consent to the nomination of MS. CHRYZL TORRES SICAT to the rank of Foreign Service Officer, Class IV.

* 14 Officials with waiver of appearance