Sponsorship Speech: Relocation of the Senate of the Philippines

Mr. President, distinguished colleagues in this Upper Chamber of the 17th Congress, I have the distinct honor and privilege to report on the Senate floor PS Resolution 293 entitled “RESOLUTION CREATING AN AD HOC COMMITTEE TASKED TO CONDUCT A FEASIBILITY STUDY ON THE CONSTRUCTION OF A NEW SENATE BUILDING AND RELOCATION OF THE SENATE THERETO,” filed by Sen. Sherwin Gatchalian.

Since the assumption of this representation as the Chairman of the Committee on Accounts in this present Congress, one of the very first things that struck me was the staggering costs of lease being paid by the government over the years in renting the Senate building and its parking lot. Truth be told, this was our top agenda when I calendared the first organizational meeting of the Committee on Accounts on 6 September 2016.

As a quick background and for the information of everybody in this hall, the Senate has been renting the use of its building from the Government Service Insurance System (GSIS) and the use of parking lot from the Social Security System (SSS) here in Pasay City since 1996.

Upon checking the figures, we found out that from May 1, 1996 to December 31, 2017, the total amount of office rental fees paid to GSIS and SSS have reached P2.24 billion. Suffice it to say, Mr. President, that for over 20 years, the cost of our lease payments have probably become enough to construct an iconic, permanent Senate building.

Most of us in this chamber, at one time or another, have been eyewitnesses to the historic and impressive Parliament buildings of our foreign counterparts every time we are invited to make goodwill visits and attend conferences in their jurisdictions.

Such structures needless to say live up to the words of a Chinese-American architect I.M. Pei when he stated that buildings are the true “reflection of society” – that you have to cast your eyes on those structures in order to feel the presence of the past and the spirit of a place.

With the indulgence of our colleagues, allow me to show some of the most stunning and well-known parliament buildings around the world.

First off, the US Capitol Building in Washington D.C. is an architectural art piece completed in 1800 that was inspired by the Louvre and the Paris Pantheon. This building, which houses the United States Congress, is known as one of the most magnificent parliament buildings in the world since the time it was erected.

The Palace of Westminster is an iconic landmark of London. More popularly known as the Houses of Parliament, it is now one of the most popular tourist attractions in the city, not only because of its architectural beauty but also of its rich history.

The Hungarian Parliament Building in Budapest, which was completed in 1904, is one of Europe’s oldest legislative buildings. This structure was a result of the architectural design competition which they conducted in order to build a monument that symbolizes the independence of Hungary from Austria.

The Reichstag Building in Berlin is one of the most famous tourist attractions in Germany. It is a legislative building known for its glass dome which gives one a spectacular view of the city.

These buildings are known globally not only for their architectural brilliance, but also for their just representation of the dignity of the parliaments that they house – something, which all of us in this august chamber will surely agree, is also fitting for the Senate of the Republic of Philippines.

In addition, I think it is worth mentioning here that no less than our own Supreme Court has taken a leap forward in the groundbreaking of its new home – a sprawling architecture with its Philippine flag-inspired design, solar-powered and earthquake-proof structure. By 2019, our high tribunal will already find its home at the Bonifacio Global City in Taguig.

Mr. President, distinguished colleagues, this representation wants to emphasize that talks of finding a new home for the Senate is actually a 17-year-old idea. Our hardworking Senate Secretary himself, Atty. Lutgardo Barbo, is our living attestant to the plan of relocating and constructing a permanent Senate building way back in year 2000 during the Senate Presidency of Senator Aquilino “Nene” Pimentel Jr., the beloved father of our present Senate President.

Lots of proposals were conceptualized since then, but unfortunately, none of such has materialized to this day.

This time around, two potential relocation sites are being eyed to be the permanent home of the country’s Upper Chamber: in Antipolo City, Rizal province; or in Fort Bonifacio, Taguig City.

First, at the City of Antipolo in the province of Rizal.

Through its Mayor, the Honorable Casimiro A. Ynares III, the local government of Antipolo City has expressed its willingness to donate to the Senate of the Philippines 25 hectares of land located along the Marikina Infanta Road, Barangay San Jose/Inarawan as a possible site of the new Senate complex.

Since Antipolo City is offering 25 hectares of land for free, this means that there will be no land acquisition cost on the part of the Senate. Selecting Antipolo City shall however consider the cost of land development estimated at P4,000 per square meter on a flat clear terrain.

The City of Antipolo is eyeing a four-year timeline before the Senate can fully occupy the proposed Senate Building: six months for design development phase, one year for land development phase, two-and-a-half years for the construction phase.

The second option for possible relocation site is in Taguig City, NCR.

It is situated in a 20,000-square-meter or two-hectare parcel of land owned by the Bases Conversion and Development Authority (BCDA) located at the former Navy Village, Fort Bonifacio, Taguig City. The agreement being proposed by the BCDA is in the nature of an Option Contract.

The consideration for the Option to Purchase is P100,000, and the period within which to exercise such option would be one year from the execution of the Memorandum of Understanding (MOU). We will work out that this requirement be waived to avoid a possible issue with the COA rules and regulations as well as the Government Procurement Act.

With the property being valued at P90,000 per square meter, the total cost of acquiring the 20,000-square-meter property being offered by the BCDA will be P1.8 billion, which would be payable in 10, possibly more years.

In one of the public hearings conducted by your Committee on Accounts, the BCDA expressed that they target the execution of a Memorandum of Understanding (MOU) with the Senate anytime between October to November 2017. Based on their proposed timeline, the construction of the Senate building can start on the third quarter of 2018 and be finished by the third quarter of 2020.

In this regard, part of my submitted individual amendments to the General Appropriations Bill now pending before this body is a P1.5-billion realignment as initial appropriation for a multi-year budget for the Senate relocation. I hope that the chair of the Finance Committee, the very gorgeous Sen. Loren Legarda, will accept my proposed amendment in this regard. 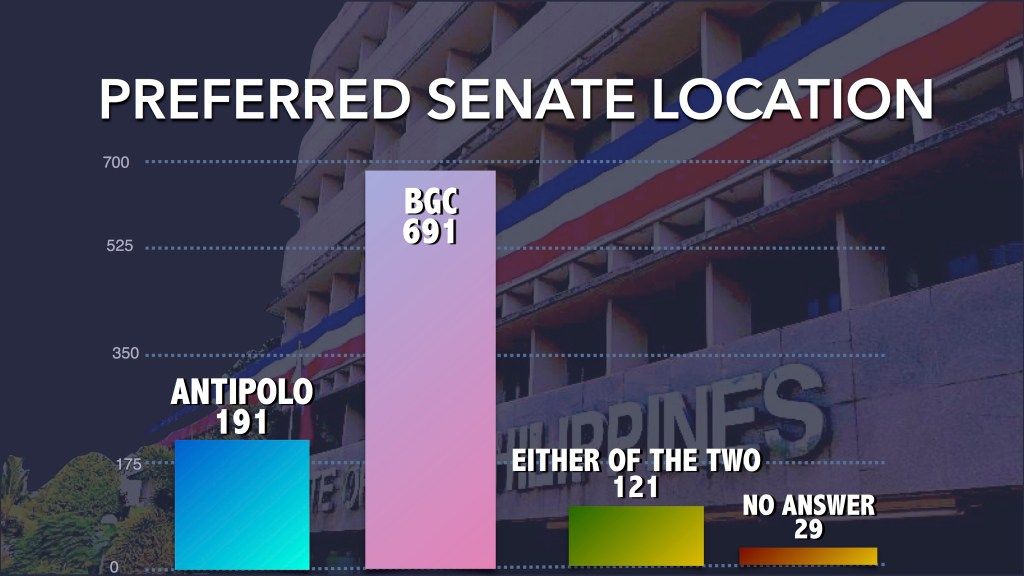 Mr. President, distinguished colleagues, it is about time that we turn this long-standing dream into reality. If we do not take action now, I am afraid that there will only be talks and talks, again and again, about this matter in the future till kingdom come. And I tell you, it will be a never-ending comic cycle.

It is therefore the recommendation of this Committee to bestow the task of pursuing the relocation and overseeing the eventual construction of a new house for the Senate be given to an ad hoc Senate committee to be decided and created by this august body. Your Committee on Accounts will be most willing to assume this responsibility if tasked to do so.

After presenting all the facts and circumstances, this Committee will humbly leave to the entire body the decision to determine the relocation site – whether to move to Antipolo City, Rizal province; or to the Navy Village, Fort Bonifacio, Taguig City.

Mr. President, as so many Congresses that came before us have had before, we gather in this plenary hall to realize a long-standing dream. I urge you to support our goal of finally building a home for the Senate, whose members’ voices represent the greater interests of the people, whose great minds craft meaningful legislations, and whose humble service build the arsenals of democracy.

Together, we can give the Philippine Senate a dignified home rightful of its honor and legacy.

I therefore move – after entertaining some clarificatory questions, if any – that our colleagues may wish to propound, to divide the house to decide: first, if we will act here and now to relocate the Upper House of the Congress of the Republic of the Philippines from this present self-degrading site founded on a pathetic “landlord-tenant” relationship to a more dignified, iconic edifice that we can truly call our own that this present 17th Congress can leave as a proud legacy to the future generations of legislators; and second, on the relocation site – either in the City of Antipolo, or in Fort Bonifacio, Taguig City.

I so move, Mr. President.