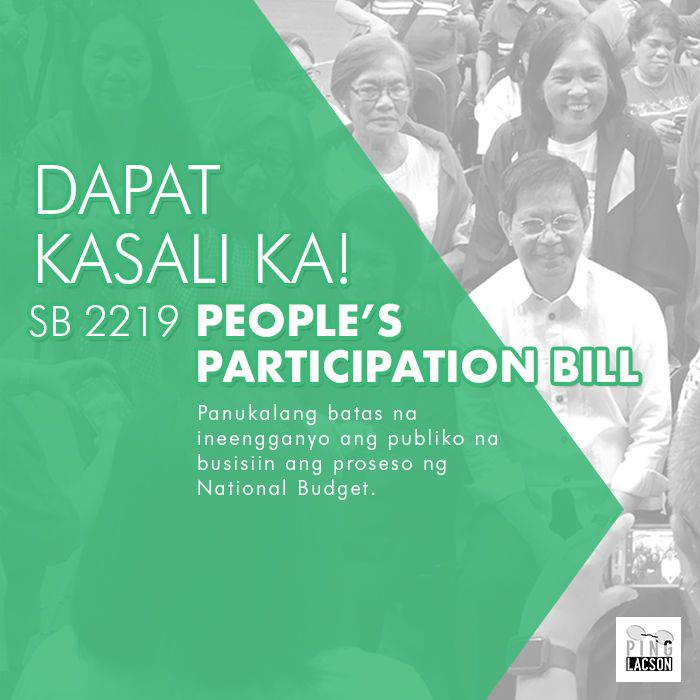 Senate Bill 2219 discourages ‘pork’ insertions by getting the public directly involved in the preparation of the national budget.

Taxpayers themselves will soon serve as the biggest safeguard against pork barrel being sneaked into the national budget, with a bill filed by Sen. Panfilo M. Lacson.

Senate Bill 2219 institutionalizes the direct participation of people’s organizations and non-government organizations in the preparation of the spending bill.

“Now is the time for Congress to recognize the importance of the direct participation by people’s organizations and non-government organizations in the budget deliberation,” Lacson said in his bill.

“We should institutionalize the practice of legislature-civil society collaboration in order to achieve a people-oriented budget as well as establish transparency and accountability in the budget process,” he added.

Lacson noted the standoff that delayed the passage of the 2019 national budget was due mainly to abuse and indiscretions by some legislators from both houses of Congress.

He lamented the House of Representatives’ leadership even went beyond the mandate of the law and time-honored legislative practice by introducing realignments even after the budget had been ratified – a violation of the 1987 Constitution.

President Rodrigo Duterte signed the 2019 spending bill last April 15, but not without vetoing P93.5 billion in questionable items, including the post-realignment manipulations questioned by Lacson and the Senate leadership.

In his bill, Lacson emphasized the budget encompasses all aspects of governance and reflects the government’s sincerity and political will to achieve social and economic change.

“The vital role it plays in the operations of our government, and ultimately in the life of every Filipino, demands that there should be mechanisms in place that will enable citizens to participate in the budget process so as to correct spending priorities and to ensure transparency in the appropriation of valuable taxpayers’ money,” he said, adding the budget process allows Filipinos to exercise their citizenship through the power to directly influence social and economic priorities.

Lacson, who has served as a watchdog of the budget, stressed civil society organization (CSO) participation “shall be a component in the preparation and authorization of the annual national budget,” with national government agencies (NGAs) and government-owned and controlled corporations (GOCCs) outlining the relevant mechanisms for their active participation.

Under the bill, CSOs such as NGOs and professional and faith-based groups can observe public consultations, and submit position papers for the consideration of the NGAs or GOCCs.

However, those that are accredited will have additional privileges and incentives, including being allowed to observe at budget deliberations and at the bicameral conference; and participation as resource persons in budget hearings in both houses of Congress. They shall have access to documents including copies of the budget proposals submitted by NGAs or GOCCs to the Department of Budget and Management (DBM), and can provide written proposals and position papers to the DBM on the budget proposals of NGAs or GOCCs; and submit their own alternative or proposed budget.

For their part, the Senate Committee on Finance and House Committee on Appropriations shall schedule one hearing day for the presentation of the positions of accredited CSOs on the budget.

CSOs may apply for accreditation before NGAs, GOCCs, the Senate, House of Representatives, Judiciary and Constitutional Offices. They should provide documents including full disclosure of sources of funds, as well as of service contracts with other NGAs, CSOs, private corporations, other CSOs and other engagements that may result in potential conflict of interest.