September 10, 2020 - At the hearing on the proposed 2021 budget, Sen. Lacson stressed the need for greater government support for research and development, especially in the fight against COVID-19. He also raised questions on:

﻿﻿* SUPPORT FOR RESEARCH AND DEVELOPMENT:

Sen. Lacson questioned why the 2021 budget for DOST’s Research and Development Institutes was slashed by P76M, as he stressed the need to allot more funds from the budget to research and development. He lamented R&D has received a mere 0.3 to 0.4% of the national budget in past years. 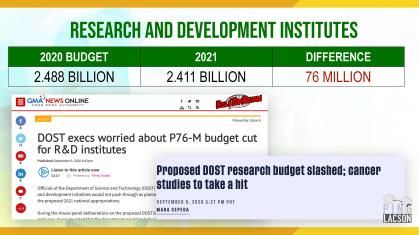 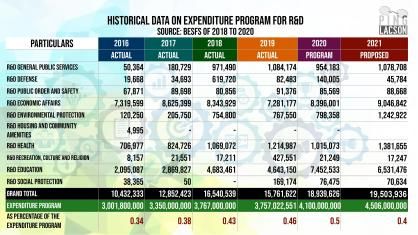 Lacson added even the UN Department of Economic and Social Affairs underscored the importance of S&T especially during this time of the pandemic. But now, he lamented some agencies’ R&D efforts are limited to Googling for what to procure. “What kind of R&D efforts do we have in this country? Kaya i-Google maski ng Grade 5 pupil ang kung anong bibilhin. Yan ang gusto ko malaman. Bakit ganoon ang policy natin towards R&D and towards S&T?” 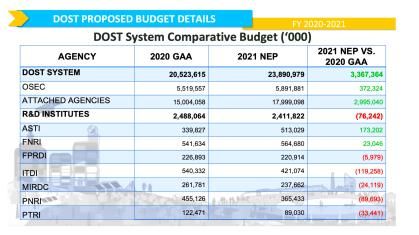 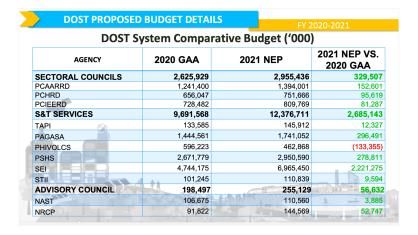 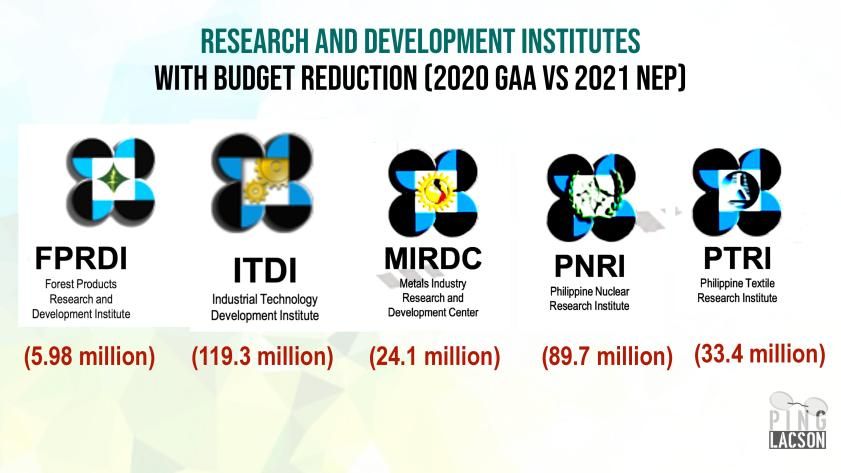 DBM Sec. Avisado said he agrees, adding that in Cabinet meetings “yan ang laging tulak ni Pangulo, na suportahan ang R&D.” Avisado added R&D funding is not only for DOST but also for other departments including defense and environment.

He added the DOST and its attached agencies increased their budget from P20.523B in 2020 to P23.89B, or a 16% increase. He added P283M was allocated for the establishment of the Virology Science Technology Institute; and another P66M for the Philippines’ participation in the international solidarity clinical trial for COVID vaccine launched by WHO. 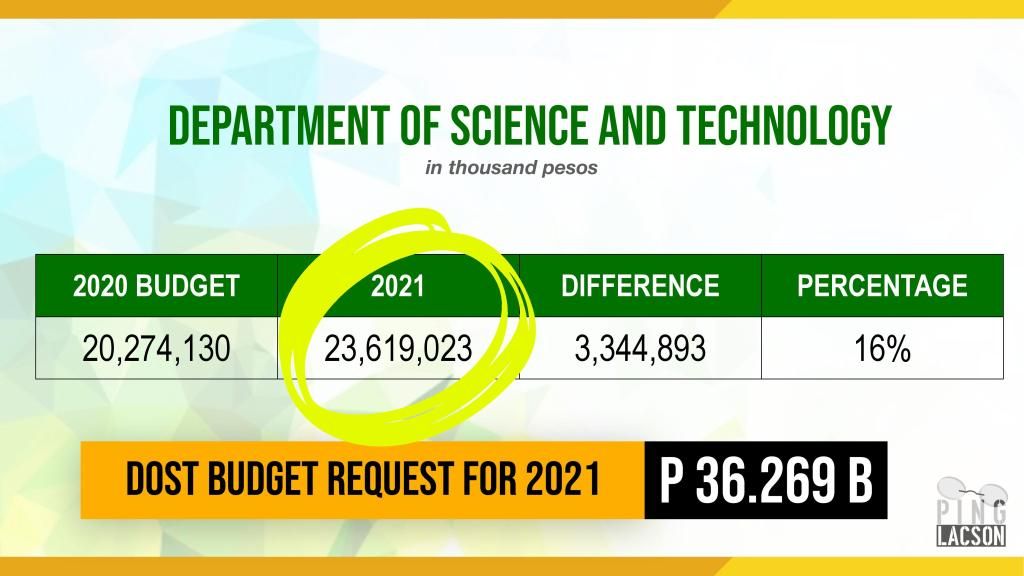 Meanwhile, Sen. Lacson pointed out he has made the initiative to increase funding for R&D, including P60M during the Arroyo administration. “I am a believer na sayang naman ang mga talent natin. I hope as a policy decision sana maglaan tayo ng mas kaunting halaga pa para mag-invest tayo sa R&D natin,” he said.

* NATAPYASAN? PHILHEALTH NOT GETTING FULL ALLOCATIONS FROM SIN TAX COLLECTIONS? 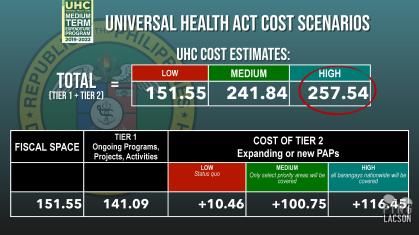 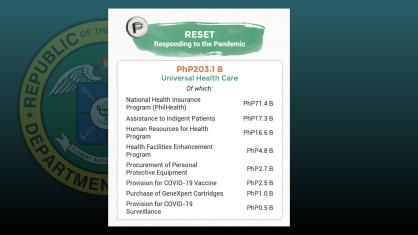 Sen. Lacson resumed his inquiry on the P30B difference between allotments worth P389B and allocations in the amount of P359B, in relation to the government response to coronavirus. “May we know which agencies are responsible for the P30B spending gap by failing to disburse? And as a follow-up, which sectoral beneficiaries have not been adequately addressed?” 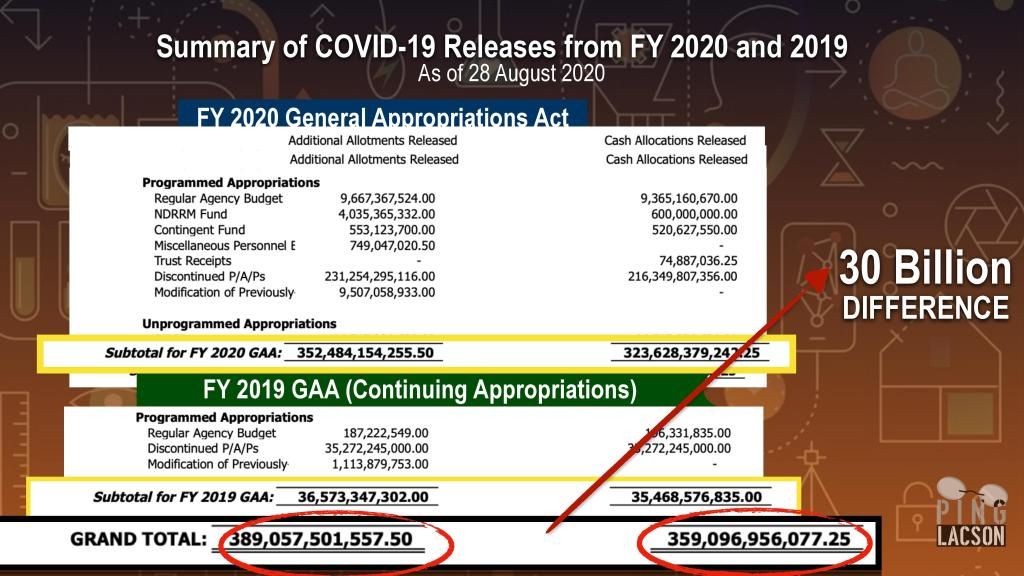 DBM Sec. Wendel Avisado explained the disbursements are with the individual departments and agencies, and that the DBM had released all allotments to the DSWD especially for SAP.

The NEDA’s timeline indicates the Philippines should be in the “Resiliency” stage by 2021, thus its focus on the Build, Build, Build infrastructure program, with a budget of more than P1 trillion. 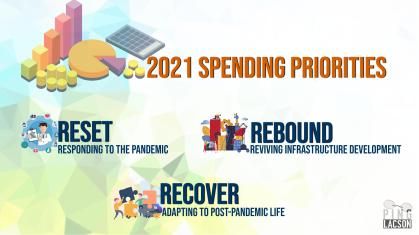 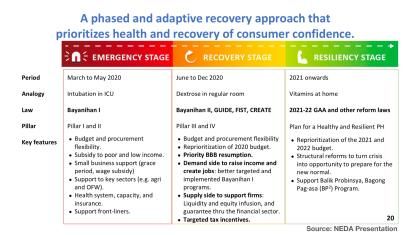