August 11, 2020 - At the hearing of the Senate Committee of the Whole regarding corruption at PhilHealth, Sen. Lacson bared more irregularities involving issues such as the Interim Reimbursement Mechanism and procurement of IT equipment. He also called for a “special special audit” of PhilHealth – and called out a PhilHealth executive for alluding to investigators as “kampon ni Satanas.”

Sen. Lacson disclosed the board resolution that would be the basis of the circular for the IRM for COVID-19 cases came AFTER the circular, instead of before. 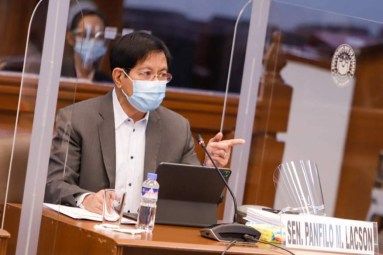 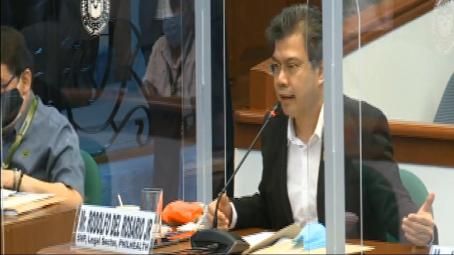 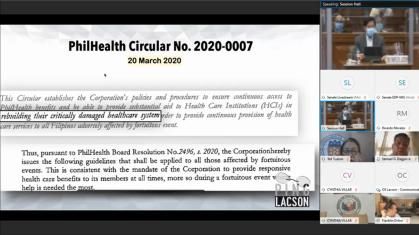 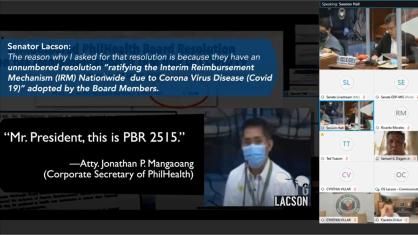 Sen. Lacson also noted that while past issuances of PhilHealth were disseminated the same day or the day after, the circular on IRM for COVID cases was disseminated April 22, or one month after. “In an effort to justify, in-antedate nila to March 21. But the date of dissemination was April 22.”

While PhilHealth PCEO Ricardo Morales explained that some expediency had to be adopted, Board Member Mercado said they were not talking about COVID in end-January. “I remember the Wuhan couple I think that was February. Naunahan nila ang unang COVID case, na-anticipate nyo na?” Sen. Lacson added.

No Due Diligence: P45M to Unregistered Dialysis Center

Sen. Lacson also questioned PhilHealth’s release of P45M to B Braun Avitum dialysis center, including P15M for its Tondo branch – without realizing B Braun is not registered with the SEC. 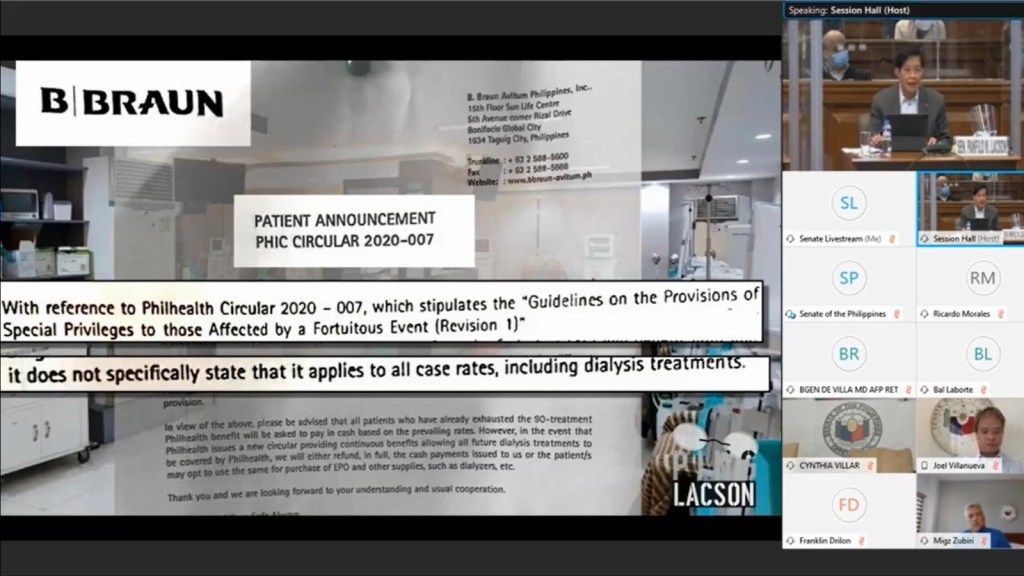 On the other hand, Lacson noted PhilHealth’s office in Region 2 mistakenly deposited to a rural bank in Bataan in Region 3 a total of P9.705M. The amount was supposed to be deposited to B Braun Avitum Philippines. The RVP involved was relieved from his post but “rewarded with a promotion after undergoing such an investigation,” while two other officials involved were slapped charges of mere “simple neglect of duty.” “You were about to lose P9.7M, simple neglect of duty? Di pwedeng systems error.” 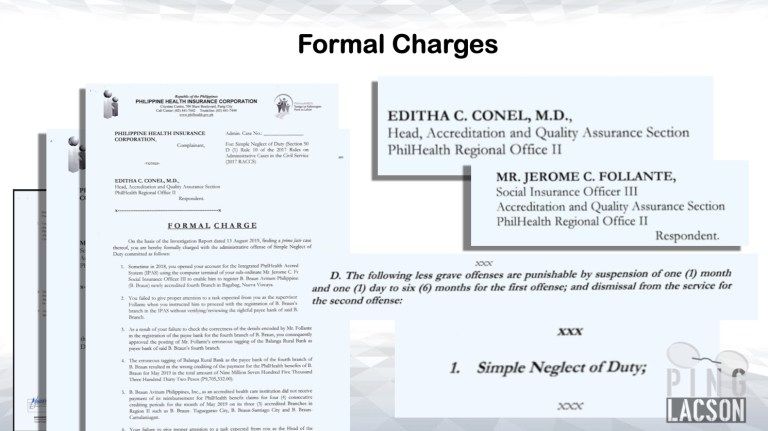 Worst, Lacson said Gat Andres Bonifacio Memorial Medical Center has yet to receive P20M in reimbursements from PhilHealth as of June 9, 2020. 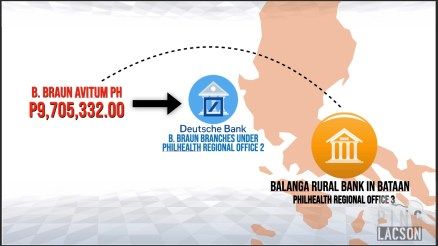 “Alam nyo kayo sinisingil ng GAB P20M, yet BBraun na walang kinalaman sa COVID, (P45M)?” Sen. Lacson pointed out that while the Senate is not against PhilHealth giving funds to dialysis centers, it is under another program not covered by Circular 2020-0007. “P20M ang tagal nang sinisingil ng GAB which is a govt hospital. Ang binayaran nyo B Braun 45M, walang COVID patient, under COVID-19 IRM.”

Sen. Lacson enlisted the help of the PACC to look into a mystery account that was the subject of 11 transactions worth P9.7M. “Probably you can make representation with the Ombudsman to dig deeper into details of the account.”

“Let’s confirm kung B Braun ang account name… With the permission of the Senate President, we’ll provide you all the documents we have.”

Sen. Lacson also questioned the “deduction” of IRM for Taal when the pandemic hit.

“Nang nagkaroon ng pandemic deduct nila ang ni-release for Taal which I think is wrong. It is covered by another circular… Why would you deduct from Taal, e pandemic din ang taga-Batangas? Dapat start from zero as far as IRM for COVID-19 is concerned.”

Meanwhile, Sen. Lacson questioned the possible favoritism by PhilHealth in Eastern and Western Visayas, citing records where PhilHealth Regional Office 6 sent the central office a request letter dated April 8 and a follow-up letter April 15, but did not receive a response until June 22.

He also said that while the purchase was aborted, some have to be made accountable. “Who will be made liable for attempted overprice of procurement? Somebody must be held liable. Di lang overpriced, grossly overpriced.”

Sen. Lacson stressed the need for a “special special audit” due to PhilHealth’s recurring restated financial statements. “You are helpless because PhilHealth is not giving you access to its financial records. What will you do given the situation?”

He also noted PhilHealth uses prior year adjustments “year in and year out,” adding this is “done deliberately to make life difficult for (COA).” He called for a special audit of PhilHealth. “Make it a special special audit.”

Sen. Lacson noted that when corruption becomes habitual, “the time will come some people will reach their limit. May hangganan ang kayang sikmurahin ng corruption.” But he added they are happy there are “decent” people in PhilHealth giving them information about the wrongdoing.

“We’re so happy there are decent people in Philhealth giving us all this info. Kung hindi, kawawa na si Pilipino.”

Sen. Lacson also questioned del Rosario about a pending case he has before the Civil Service Commission that was filed in 2018.