September 6, 2021 - Mr. President and distinguished colleagues, it is my honor to report on the floor Senate Bill No. 2376 entitled, “An Act Strengthening Professionalism and Continuity of the Policies and Modernization Initiatives of the Armed Forces of the Philippines, Providing Funds Therefor, and for Other Purposes” as embodied in Committee Report No. 297 in substitution of Senate Bill Nos. 1785, 1045, and 1370 filed by Senators Richard Gordon, Aquilino “Koko” Pimentel III and Emmanuel “Manny” Pacquiao, respectively.

The clamor for this measure has echoed from the grounds of Camp Aguinaldo to the halls of the Senate repeatedly over the years. Generations after generations of military men have clamored for this piece of legislation, most of them had long retired from the service without this measure seeing the light of day.

Mr. President, in the three-and-a-half decades of six (6) past and incumbent presidents, we have had 37 Senior Officers appointed to the position of the Chief of Staff.

Under the Arroyo regime, alone, the number of appointed AFP chiefs totaled 11 senior officers in less than 10 years. Former President Aquino appointed seven (7) AFP chiefs in his six-year term. Meanwhile, in the span of five years under the present leadership of President Rodrigo Roa Duterte, 10 have already been appointed to lead the armed forces, each one serving a term for only a couple of months. Easily, he breached the record of the most number of appointed chiefs of staff by any president who has served in a single term. 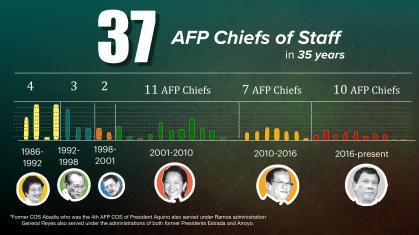 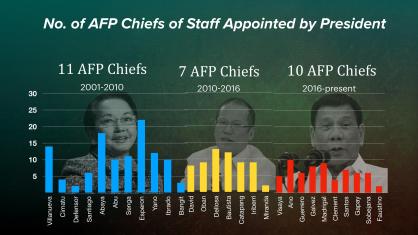 Compared to other Southeast Asian countries, the average term of duty of the AFP’s Chiefs of Staff is distinctly short. In fact, it is not more than 7 months for each of the last five (5) AFP chiefs. The last five Chiefs of Singapore’s Defense Force each served for three (3) years on average; Malaysia’s Chiefs of Armed Forces served for 2 years and 212 days, and Indonesia’s Commanders of National Armed Forces served for 2 years and 132 days. 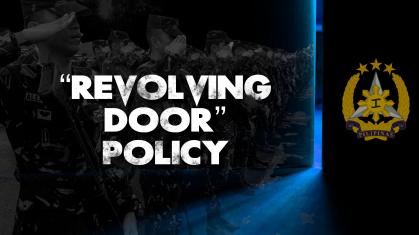 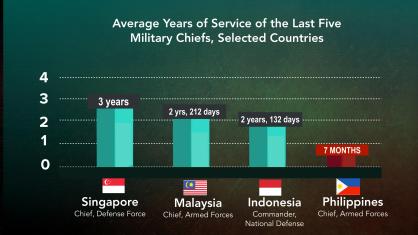 Mr. President, time and again, we see leaders of our armed forces come and go through the ‘revolving door policy,’ staying in the office just to warm up their seats and not long enough to implement their legacy programs. This state of things has always been a disservice to the mandates of the military leadership entrusted with the security and defense of the country.

Attempts to shut the ‘revolving door policy’ in the AFP have been debated upon in this very hall for over a decade. During the 15th Congress, I stood on the same grounds as the principal author and sponsor of Senate Bill No. 2869 which provides for the Fixed Terms for the Chief of Staff and the Major Service Commanders of the AFP.

The same bill, which was passed and approved by both Houses of Congress, was unfortunately vetoed by the late President Benigno Aquino III, based on the following grounds: one, on the matter of constitutionality, citing Section 5, Paragraph 5, Article XVI of the Constitution, mandating that laws on the retirement of military officers shall not allow for an extension of service; and two, it presented a policy issue as it curtails the discretion and authority of the President — rightfully as the Commander-In-Chief of the Armed Forces — to remove the Chief of Staff from office once his full trust and confidence are lost. 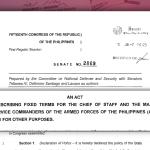 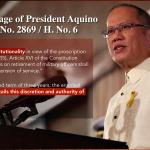 This substitute bill is a departure from Senate Bill 2869 as it addresses not only the incongruous revolving policy of the AFP but also the stringent restrictions of the Constitution. Essentially, the bill proposes the following:

* One, fix the tour of duty of the Chief of Staff and other officers holding key positions;

* Three, ensure the implementation of merit-based promotion and attrition systems that will assure the Armed Forces of a continuous pool of qualified and effective leaders;

* Fourth, amend the age of commission of officers of the AFP; and,

* Fifth, provide a new grade distribution of officers to ensure that we do not end up with a bloated officers’ corps.

Mr. President, while we accept the quick turnover of the military leaders as commonplace, we face far-reaching issues in the stability and continuity of military leadership. 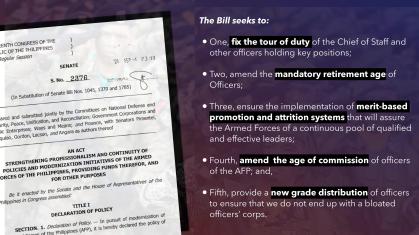 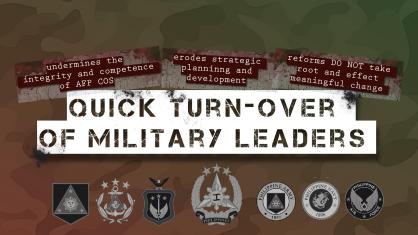 Short-term leadership of ‘quickie generals,’ so to speak, often undermines the integrity and competence of the position of Chief of Staff. It erodes short- and long-term strategic planning and development, leaving behind reforms to take root and effect meaningful change in the military.

History has taught us that this revolving door policy in the AFP is attributed to the statute on mandatory retirement among our military personnel at the age of 56.

From the standpoint of our uniformed men and women who take years to earn their stars and stripes, this is a precarious position. As a matter of record, they will be at least 54 or 55 years old on average to reach the top leadership posts, compelling them to leave their service without even completing the maximum tenure of 3 years, as provided for by our laws. 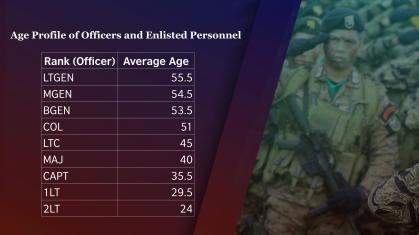 Mr. President, Senate Bill No. 2376 seeks to change the compulsory retirement age of 56 under Presidential Decree (PD) No. 1638, as amended by PD No. 1650, by setting the mandatory retirement of the Commissioned Officers to the following:

* Fifty-nine (59) years old or accumulation of thirty (30) years of satisfactory active duty, whichever comes earlier, for those in the grades of Second Lieutenant/Ensign (O-1) to Colonel/Captain (O-6)

* Fifty-nine (59) years old or the maximum tenure-in-grade, whichever comes earlier, for those in the grades of Brigadier General/Commodore (O-7) to Lieutenant General/Vice Admiral (O-9)

* For those occupying a key position, upon completion of the three-year fixed tour of duty regardless of age but not more than 62 years old, unless promoted to Chief of Staff or who is relieved from post and is not designated to or occupying any position in the AFP Table of Organization; and,

* Those commissioned under Presidential Decree No. 1908, and those appointed in the Corps of Professors upon reaching the age of sixty (60) or completion of twenty (20) years of satisfactory active duty, whichever comes later.

As for the retirement grade, we adhere to the recommendation of the DND leadership that officers and enlisted personnel shall be retired in the permanent grade they last held.

Mr. President, so as not to drown you out with figures, the bill simply provides for a reasonable, realistic, and practical duration for our AFP officers to deftly fulfill their duties without having to rush to the doors just when they have attained leadership roles with their general/flag ranks.

Accordingly, the fixed tour of duty of three (3) years shall be accorded to the Chief of Staff, Vice Chief of Staff, Deputy Chief of Staff, major service commanders, commanders of the unified commands, and the Inspector General. These key positions rightfully deserve a sense of stability and continuity of their service which the AFP’s revolving door policy is devoid of. 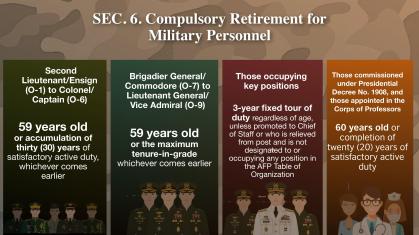 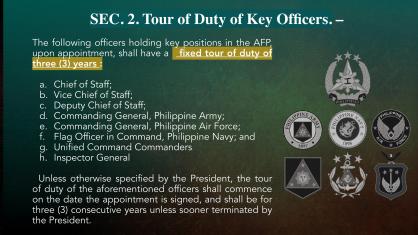 It goes without saying that this bill provides the much-needed ‘moral incentive’ to our military leaders. With their appointment at the helm of the AFP, they get the chance not only to learn the ropes but to actually steer the armed forces in the right direction.

The bill likewise takes particular thrust in ensuring that the position of the Superintendent of the Philippine Military Academy (PMA) will be conducive to good leadership because the constant change in policy and command on this rank will be detrimental to the institution. Hence, the PMA Superintendent shall be exempt from the application of the maximum tenure-in-grade and shall be given a longer tour of duty of four (4) years, provided that he/she shall not be eligible for any other position in the AFP and be retired from the military upon the completion of his/her tour of duty.

Mr. President, we emphasize that the fixed tour of duty of these ranking officers is without prejudice to the power of the President as the Commander-in-Chief to terminate or relieve these officers from their posts.

The proposed bill also provides for the new tenure-in-grade or the allowable maximum year given to an officer or enlisted personnel in a certain grade or rank. Put simply, Mr. President, our military men must either “move up or move out.” 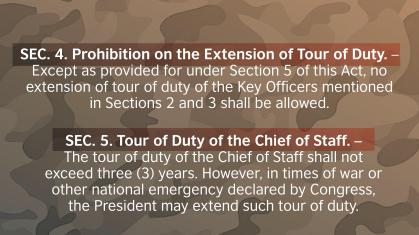 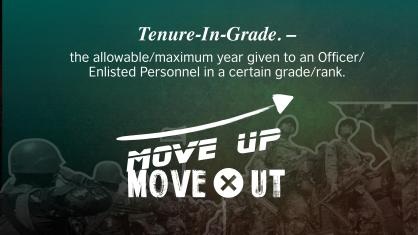 Officers or enlisted personnel who fail to go up the ladder on account of their own fault, failure or negligence, or lack of individual merit will be subjected to forced attrition. 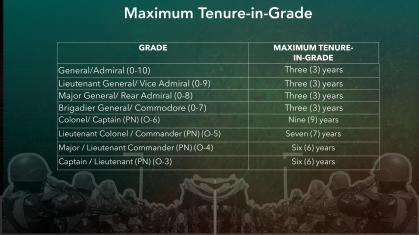 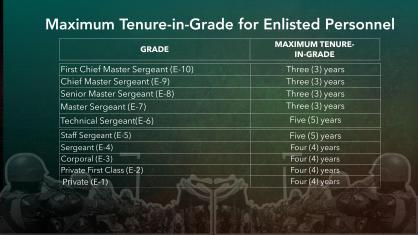 The proposed stricter attrition system guarantees the succession of qualified and effective leaders in the AFP. This places a premium on professionalization and merit-based promotion and weeds out lame ducks in our military circles.

In consideration of the longer years that students take at the primary and secondary education because of the K-12 program, the bill also changes the age requirement for commissionship to 21 years old but not more than 28 for all officers in the Regular Force from the present 21- to 26-year-old age of eligibility.

Mr. President, you and I will agree that the AFP should avoid having too many generals but with fewer soldiers to command. Hence, the proposed bill provides for a more ideal General/Flag officer-to-total force ratio of 1:1,000. 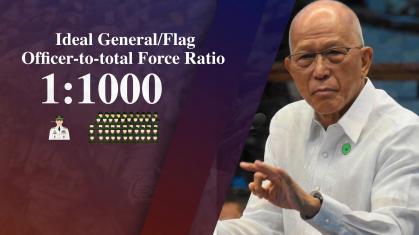 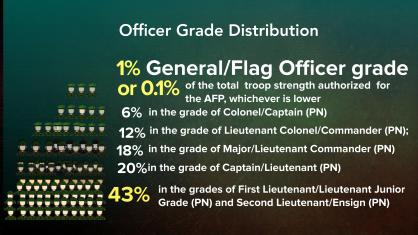 Thirty (30) years ago, Republic Act No. 6975, otherwise known as the Department of Interior and Local Government Act of 1990, prohibited retired or resigned military officers or police officials from being appointed as Secretary of the DILG within one (1) year from the date of his retirement or resignation. However, no similar law prohibits retired military personnel from being appointed as Secretary of National Defense.

As the saying goes, what’s good for the goose is good for the gander. Hence, we propose that no retired or resigned military officer may be appointed as Secretary of National Defense within one (1) year from the date of his retirement or resignation.

With the transformative reform that this new retirement, separation, and procurement system entails, we must make sure that a systematic transition is in place.

The transition should be clear that the provisions of the fixed tour of duty and maximum tenure in grade shall only apply to concerned military officers appointed after the effectivity of the Act or to their next promotion, respectively. A level-playing field for promotions and proper grant of separation and/or retirement benefits shall also be accorded to all officers and enlisted personnel.

Genuine reforms in the military are long overdue. The military institution cannot afford to constantly hit-or-miss because of its ever-changing leadership and institutional environment. It needs continuity, stability, direction, and a sense of professionalism that the members of the Sandatahang Lakas rightfully deserve.

Mr. President, let us not put to rest and lay in the legislative graveyard this much-needed bill. We must strive to breathe a new life into this measure that accords the integrity worthy of our military institution and the protectors of the people and the state.