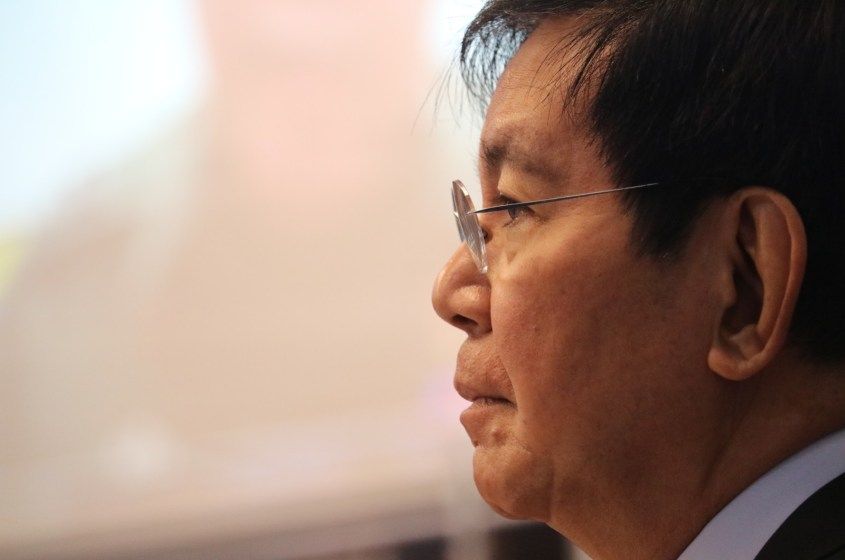 December 14, 2020 - From Lito Banayo’s column in the Manila Standard: Those who know the man enough also know that he would rather fight the good fight, regardless of the odds, a seeming Don Quixote jousting against the windmills of evil, fighting the unbeatable foe, regardless of public approbation or disapproval from peers—outlier if need be—just to be consistent with what upon his graduation from the Philippine Military Academy in the Class of 1971, he vowed: “What is right must be kept right; what is wrong must be set right.”

Another budget season in Congress has passed. We await only the President’s signature on the appropriations bill that shall become law of the land. That law is both license to spend for 2021 and our economic program in pesos and centavos, in items and figures.

One man, from the beginning of legislative deliberations until the end of the bicameral conference committee, had been a voice in the chorus of hallelujahs, pointing out and questioning slabs of “pork” in the interstices of the two-inch thick book submitted by the executive branch as the national expenditure program for the coming year.

Next year’s general appropriations law was almost hijacked from legislative approval by a decapitation of the Speaker of the HoR and his replacement by earlier anointed, as sealed in a pacto de compromiso in Malacañang.

The decapitation was so acrimonious, so filled with unseemly drama, replete with stabs in the back, but then again, what else could ever be new in the HoR?

The Senate watched in undisguised nonchalance, unperturbed by the prospects of whoever their peers would choose to head them, because after all, every piece of legislation, while emanating from Quezon City would still require review and assent in Pasay.

This separate locus of two co-equal chambers of a single legislature is unique. Since the old and majestic legislative building fronting Intramuros was retro-fitted to become part of our National Museum, the House held fort in the martial law-built Batasan while the Senate became a tenant of the GSIS in its massive headquarters overlooking Manila Bay from its Pasay side.

The physical separation has also made legislation less of a joint undertaking, and more of a virtual swordplay between the two houses, as in a Montague and Capulet, restraining their animosity towards each other only for the singular afternoon in a year when they would listen to the “Doge de Verona” in his SONA, forcing the senators to troop to the cavernous hall in Quezon from their aerie in Pasay.

One man from the Senate has his staff poring through the minutiae of the “president’s budget” as soon as it comes out of the presses of the Department of Budget to look for lump sum allocations and mysterious nomenclatures for expense items. Then, as it goes to the HoR where the previous Speaker and his trustees inserted their “pork” after “deliberations and consultations” with the line agencies submitting to injections of pork fat, that senator compares the slabs after a new Speaker gets elected—rather, anointed.

Whereupon he discovers that the previous interstices have been “adjusted”, nay, sucked up, and into the vacuum, “new” slabs had been inserted.

It is a rather tedious task which this solitary legislator seems to relish while his confreres do not bother. Media reports the pork, which the Supreme Court in another era “dis-authorized,” but somehow the legislators have managed, with the concupiscence of executive agencies, to restore, given new names and new disguises. But for this senator, baboy is where pork is.

And meanwhile, the solitary figure continues to pore at his magnifying glass, like a Sherlock Holmes which before his career re-incarnation as a senator he actually was, as chief of the national police. Year-in and year-out, he does this routine, and for his part, eschewed and abjures himself from slicing his own share of the bacon.

His peers in both houses of Congress “hate” him for this, but for most part, simply babble rationalizations of “need” of constituencies, eventually forcing the tyranny of numbers in the bicameral conference committee where the by now three-inch thick book called GAB is submitted for sentencing, there to outvote their outlier.

An outlier this senator is, indeed.

When he headed the national police, he forbade “kotong,” or the daily petty graft that victimized street vendors, viajeros, tinderas, and practically anyone the officers of the law in blue uniforms fancied. Even if the practice had become lay of the land.

He also refused to accept “intelihensya,” that queer term for a hefty bribe which jueteng operators who began their trade as far back as the time of the Spanish friars, would generously share among policemen, police officers, mayors, noisy councilors, congressmen and even senators, all the way up to the very top of the political totem pole.

And when he became chief of the national police, he shuffled and placed in the “doghouse” police officers who partook of the intelihensya while having them investigated eventually to file charges. But then the commander-in-chief balked at this defiance of the lay of the land, and for months placed his chosen police chief in the doghouse as well.

Meanwhile a device was fashioned to make legal what was illegal, as far as the numbers game mattered. A disgruntled jueteng lord from Ilocos Sur spilled the beans, and the rest is history.

So as fate would have it, the outlier of a national police chief found himself in the Senate, where after learning the ropes quickly and after a baptism of fire from false and baseless charges manufactured by his nemesis in high places, he became a voice in the wilderness, once again an outlier.

In 2004, just three years after he had achieved for the Philippine National Police recognition into glory from a notorious past, when the public approval ratings of the graft-ridden agency had reached historic highs, the outlier ran for president, against a powerful incumbent and a hugely popular movie star, without a political party, without a vice-president, and with only one senatorial candidate by his side in the hustings. Como Don Quixote y Sancho Panza.

Though he lost the battle, the outlier won an impressive 11 percent of the national vote in a field of five candidates, even as the incumbent won a pyrrhic victory punctuated by telephone calls to a Comelec commissioner by the name of Garcillano, in a now historic episode in the life of this benighted land called Hello Garci.

Since then, he had become a public figure admired and respected by those who value courage, character, competence and principle. But then again, are those who think and are willing to listen to reason in their choices of leaders not the rule, but rather the exceptions in the benighted land?

Can Panfilo Lacson’s principled advocacies and consistent battles against pork and perks in high public offices bring him up to the highest office in the land once denied him?

Those who know the man enough also know that he would rather fight the good fight, regardless of the odds, a seeming Don Quixote jousting against the windmills of evil, fighting the unbeatable foe, regardless of public approbation or disapproval from peers—outlier if need be—just to be consistent with what upon his graduation from the Philippine Military Academy in the Class of 1971, he vowed:

“What is right must be kept right; what is wrong must be set right.”